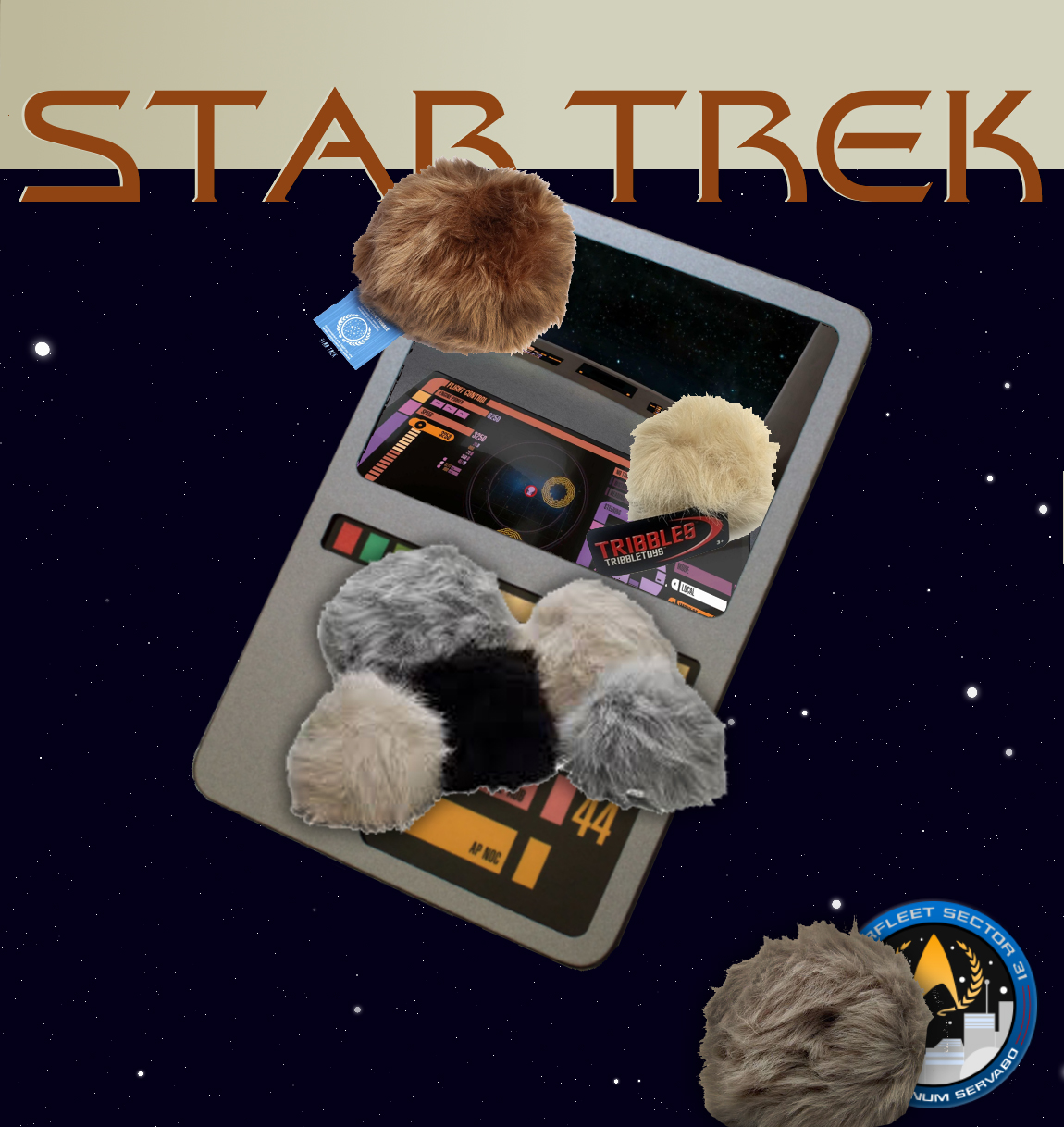 Tribbles are small, furry, unintelligent life forms that are often mistaken and adopted as pets. Along with their calm and non-threatening demeanor (Tribbles even lack teeth ) their cooing is known to have a calming effect on the human and Vulcan nervous systems. Tribbles can also be stuck to walls and vertical surfaces. Most importantly, Tribbles are asexual creatures 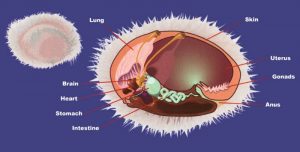 who are essentially born pregnant as half of their metabolism is devoted to reproduction. Given too much food, Tribbles begins to reproduce at a miraculous and exponential rate. A single Tribble can spawn a million Tribbles in a few days if it eats enough.The favorite Season 2 Episode of Star Trek: The Original Series titled “The Trouble 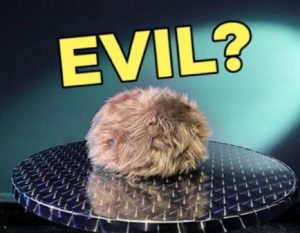 with Tribbles” introduced the creatures to Trek Lore – although for continuity’s sake they were introduced to Dr. Phlox (John Billingsley) in a second season episode of Star Trek: Enterprise. When Captain Kirk’s Enterprise was assigned to guard a vital shipment of grain from the Klingons on space station K-7, a trader named Cyrano Jones (Stanley Adams) brought a Tribble aboard the station to sell. It was purchased by Lieutenant Uhura (Nichelle Nichols), who returned it to the Enterprise. Within days, that Tribble had spawned more than a million other Tribbles, overtaking both the Enterprise and the space station. However, it was the Tribbles, who died by burning the grain, which caused Kirk to discover that the grain had been poisoned by the Klingons. The Enterprise crew then blasted all the Tribbles on the Klingon ship as it darted away.

Along with Klingons and Vulcans, it wasn’t long before Discovery once again brought on board one of Trek’s most popular alien species. Discovery’s third episode titled “Context Is for Kings” introduced Tribbles to the show. Both as adorable mascots and, surprisingly, a scourge to reckon with for humans and Klingons alike, the furry little creatures have a longhistory throughout nearly every Star Trek incarnation.

The Klingons would eventually view the Tribbles – who react violently to their presence – as one of the empire’s great enemies. As told by Worf (Michael Dorn) to Odo (Rene Auberjonois) when the crew of Star Trek: Deep Space Nine traveled back to meet Kirk’s crew on K-7 in the episode “Trials and Tribble-ations”, the hatred of the Klingons had 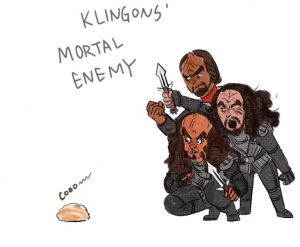 led for Tribbles to the empire destroying the Tribble homeworld in the late 23rd century. The Klingons chased as many remaining Tribbles as possible across the galaxy, causing Odo to mock his Klingon friend, “Another glorious chapter in Klingon history. Tell me, are they still singing songs from the Great Tribble Hunt?” crew of Deep Space Nine eventually brought a Tribble with them to the 24th century, flooding their space station with Tribbles.

Then, of course, there was the memorable Star Trek:The Animated Series

episode “More Tribbles, More Troubleshooting,” in which Cyrano returns with a new breed of Tribbles genetically engineered so they don’t reproduce — they just get really, really fat (it turns out later). that the Tribbles are still effectively reproducing

, and the giant Tribbles are just colonies of smaller Tribbles standing all together). That episode also introduced a creature called “the Glommer”, which was created by the Klingons for one purpose: to kill and eat Tribbles. 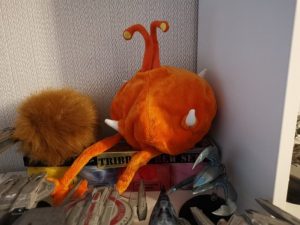 Tribbles are mentioned fleetingly in Star Trek: The Next Generation, but they made their surprise film debut in the Kelvin timeline of JJ Abrams’ Star Trek: Into Darkness. Late in the movie, Dr. Leonard McCoy (Karl Urban) tests the regenerative properties of Khan’s (Benedict Cumberbatch) blood on a dead Tribble. Khan’s blood brought the Tribble back to life; McCoy then uses Khan’s blood to revive the deceased Captain Kirk (Chris Pine). 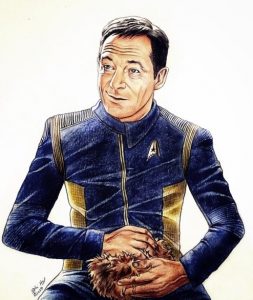 Given that the Tribble’s cooing calms people down, its presence could be something that aids Lorca in his recovery, or it simply helps ease his burden of commanding a spaceship during a wartime. We also learn that Lorca collects other species to study – for example, a skeleton of what looks like a Gorn is seen in one of the ship’s labs. Since Discovery is a science ship, the Tribble may be one of many species housed in the Discovery for research. Lorca’s Tribble is poised to appear on Discovery in the future and given that there’s only one on the ship (as far as we’ve seen) , Lorca needs to know enough about Tribbles to avoid giving him too much.

Because Discovery is ten years away from Kirk and the Klingons encountering Tribbles on K-7, the current crew of the USS Discovery doesn’t know how to arm Tribbles against their Klingon enemy. However, since the Tribbles can’t understand or interact with humanoid species and Discovery’s characters don’t know what fans know about future events, unfortunately there’s also no way to warn the Tribbles that the Klingons will blow up their home planet in a few decades.

Turns out, the Tribbles are very similar to creatures called “flat cats,” a Martian animal from Robert A. Heinlein’s novel The Rolling Stones, published in 1952. Heinlein is, of course, a juggernaut in the field of early science fiction in America, famous for writing Stranger in a Strange Land, Starship Troopers, and possibly inventing the idea of “Bootstraps Paradox” with his short story, “All You Zombies.” In The Rolling 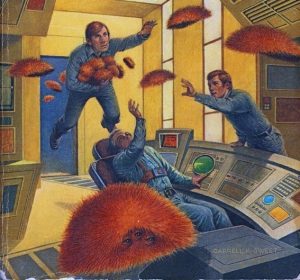 Stones, the flat cats are similar to Tribbles insofar as they reproduce like crazy and cause some space-faring folk more than a few headaches. But, when the Trek studio heads at Paramount and Desilu brought the possible plagiarism to Heinlein’s attention, the author barely minded. In fact, according to his estate and Gerrold, Heinlein just asked for one thing as compensation: a copy of the script, autographed by David Gerrold. Gerrold, of course, didn’t intend to rip-off Heinlein, and Heinlein was big-hearted enough to not mind an accidental homage to his flat cats in the creation of the Tribbles.