Why is it that Starfleet Ships seem to constantly malfunction? Why can anything be fixed by opening a panel and slotting chips about? How can Starfleet engineers pull so many one-time ship functions from nowhere? And why do Starfleet’s computers take up whole decks?

Starfleet’s Ships’ systems are made up of modular components. Ignoring specialised parts like a warp plasma injector or an antimatter storage tank or a display, the internals are made of chips (like these) with general software and hardware functions. 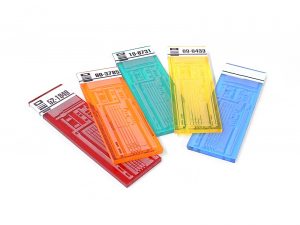 An X47101 chip for example might perform several different software functions, fairly useless on its own, but when combined they form a sort of programming language. Blocks of code run on each chip, and are joined together to create complex programs.

Starfleet Engineers can rearrange, replace, or reprogram chips to perform different functions, reconfigure a scanner, or repair a system. This could explain why the ships computer is so large compared to modern devices. Instead of scaling down the computer to save space and improve speed, Starfleet focuses on making a computer where even parts of the processor can be reorganised and replaced. Like we might have a GPU for graphics processing, Starfleet cranks this to the extreme and has a specialized processor chip for nearly every task. 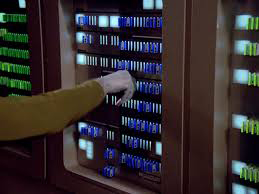 It’s also why Starfleet ships seem to malfunction so much. Millions of modular components running together are going to give you unexpected results compared to something specialized. Who knows how the blocks of code you slap together will work? And you wonder why engineers are nicknamed “miracle workers”

As far as props goes the Isolinear chip are probably the easiest to make. That s why there are so many versions to be found.(And quite cheap too) Originally they were made from plexiglass The more elaborate ones are still available from custom prop builders. Prices vary from €5-€15.

You can admire these chips at our Sector 31 meeting on the 25th of September.