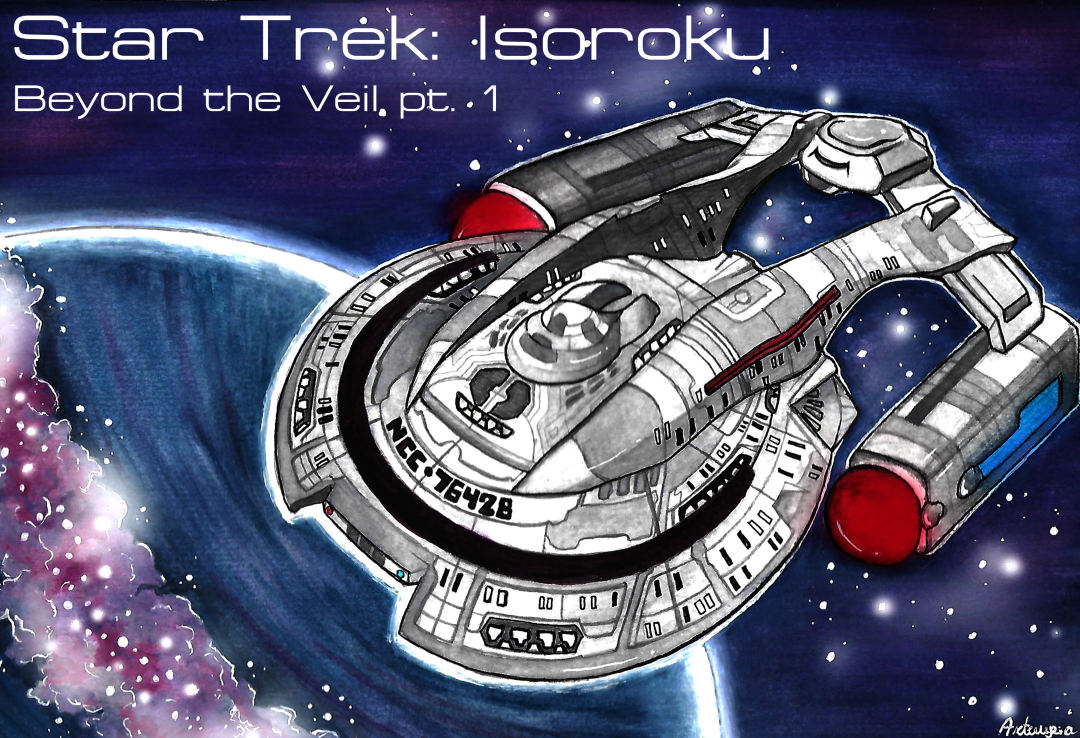 Beyond the Veil pt. 1

Kinsho’s finger slowly traced down the ridges of his nose as he looked at the telemetry coming in from the Thain system. Right outside of their main sensor range they had detected a subspace disturbance. A probe had been sent, but the technology was limited and the colony’s telemetry had been inconclusive. That’s where the USS Isoroku had been called in. The Akira class was already fitted with the sensor pod from their last two assignments, and it was relatively close.

The briefing had said it was only a matter of flying in, taking scans and making sure it wasn’t a threat to the fledgling new colony. If Kinsho didn’t know any better, he’d almost say it was going to be a routine run, simple almost. He had been through enough during the Occupation and the subsequent Dominion War to know that it was never simple. Not out here in the former neutral zone. His ruminations were interrupted by the chime of his ready room, “Enter.”

The doors to the Captain’s ready room slid open quietly and an Orion woman in her mid-twenties stepped through the doors. The yellow trim of her engineers uniform matched nicely with her green complexion, “Captain Taeler, Lieutenant Shairo. You requested my presence, Sir? I came as quickly as I could, still had some small thing to fix in the holodeck when you called me, thought it best to finish.” She gave a smile and a salute.

“Ah, yes, please, at ease.” He waved away her salute before pointing at the chair, “Take a seat. Make yourself comfortable.” He got up from his chair and made his way over to the corner of the ready room where the replicator was located. “Would you like something to drink?”

“Oh, no sir, thank you sir, I’m already on my third coffee. I should probably slow down a bit if I want to sleep before my next shift,” her smile unwavering, “just so many things to do, don’t really have time to slow down, hence all the coffee,” her smile became a crooked grin, “and all the blabbering.”

“How are you holding up without the Chief?” Kinsho ordered a coffee for himself, feeling like he needed one after hearing the engineer’s fast-paced talking.

Shairo nodded, a bit too enthusiastically. One of the bright auburn hairs she had struggled to get tied up in the tight bun on top of her head released itself and started to dangle across her forehead, she didn’t pay any attention to it. “The team is doing what they can, sir. Everything is in tip-top shape. After the recent boarding call we had a look at the sensor pod, probably needs some tuning up. I’ll have a talk with Commander StCroix”

Taking a sip from his coffee, Kinsho took a moment to process all of the information the eager engineer was firing at him. He set the cup down on his desk and faced the Lieutenant, “Before we leave port I would like to address the recent retirement of Commander Beau.”

“Right sir, of course. It was probably tough finding a replacement before we had to leave port. Never ideal to be on your way without a Chief Engineer,” Shairo nodded again, “I’m more than happy to show them the way around the Iso, Sir, get them familiar with the teams, with the ship, all her eccentricities on both those fronts.” She laughed a bit at her own joke. “where do they rendezvous with us, in the Thain system?”

“Well, I was thinking we could kind of forego all that, for the sake of continuity, and to save us some hassle,” He left a moment of silence to see if it would sink in what he meant by that, “How would you like it if I were to appoint you as the Isoroku’s new Chief Engineer?”

“Oh,” Shairo had really not seen that one coming, it silenced her for a moment, not an easy feat, especially in her current state, “you mean you want to promote me?”

“That’s what I mean,” Kinsho nodded to reinforce that idea, now with a smile of his own “you would be part of the senior staff, responsible to keep the old girl flying,” he immediately put up a finger to stop her from interrupting, “that also means you’ll have to deal with the fighter squadron and their needs. I expect you and Commander Galin to work closely together in order to keep them fighting fit. Between the Klingons, Romulans and Fenris Rangers there’s enough out here that is looking for a fight. We have to always be prepared.”

“That goes without saying, sir,” Shairo gave him a stern nod, “I will set up a meeting with the Commanders immediately, both Galin and StCroix, get everything ready to go.” She immediately got up from her seat and stood at attention.

“Now that you’re senior staff, I expect you to set the right example for your department when we’re out there,” He stepped around his desk and put a hand on her shoulder, “but there’s no need to stand on ceremony in a private setting such as this, Shairo,” he gave a light, encouraging squeeze, “I know you’re great at your job, and Cletus highly recommended you for the position,” he let go and waved her in the direction of the door to spur her along, “just make sure that you don’t give me a reason to call up Chief Beau and tell him he was wrong.”

Shairo immediately shook her head, the beaming smile returning to her face, “I won’t let you, or the Chief down, Captain, I promise.”

“We’re arriving in the Thain system in about forty-seven minutes, Commander, I wanted to make sure that all the fighters are in good shape before we get ourselves caught with our proverbial pants around our knees,” Shairo was holding a PADD and scrolling through the recent repairs and upgrade requests made by the Commander and her team, “I see all the priority one repairs have been done. Anything not on this list that we should be aware of?”

The woman grabbed the collar of her unzipped uniform shirt, by pulling it slightly down she revealed a couple more of the dark spots running along the side of her body. The fighter pilot looked at the prattling Orion with a slight eyebrow raised, “We’re good.” Liliah lifted her chin slightly at the Engineer, “So, Captain put you in charge of the wrench monkeys?”

“Uh. Yeah. I guess. Though I’m not sure I agree with that terminology,” Shairo knew that people crazy enough to step in the cockpit of a space superiority fighter also got away with a lot of crazy talk, but she wasn’t going to have them talk down on her crew, “They ar-…” Her thought was suddenly interrupted by the blaring of a red alert.

“All hands to battle stations, the Thain system is reporting multiple incursions of an unknown origin. We are jumping to maximum warp and going in hot.” the voice of the Captain announced over the PA system, before the message to report to battle stations was repeated by the automated computer voice.

Immediately in battle mode, Liliah threw off her uniform jacket and rushed for her overalls that were draped over the small mobile ladder set up against her Valkyrie class fighter plane, no longer giving any attention to the diminutive Orion woman that she had been in the middle of a conversation with just moments ago. Red alert meant go time.

“Be careful out there!” Shairo called to the Trill commander before rushing off in the direction of the exit. She was going to be needed in Main Engineering. Maximum emergency warp always put a strain on the core, and she was now the one responsible for keeping it from exploding.

When Star Trek: The Next Generation first came out I was very young, but my mother would always watch it with me. Watching TNG, DS9 and VOY throughout the 90s kept me going, but when the new millennium hit I needed more. So I started writing my own Star Trek stories. I hope that through expanding on those stories we can keep Roddenberry’s vision alive.