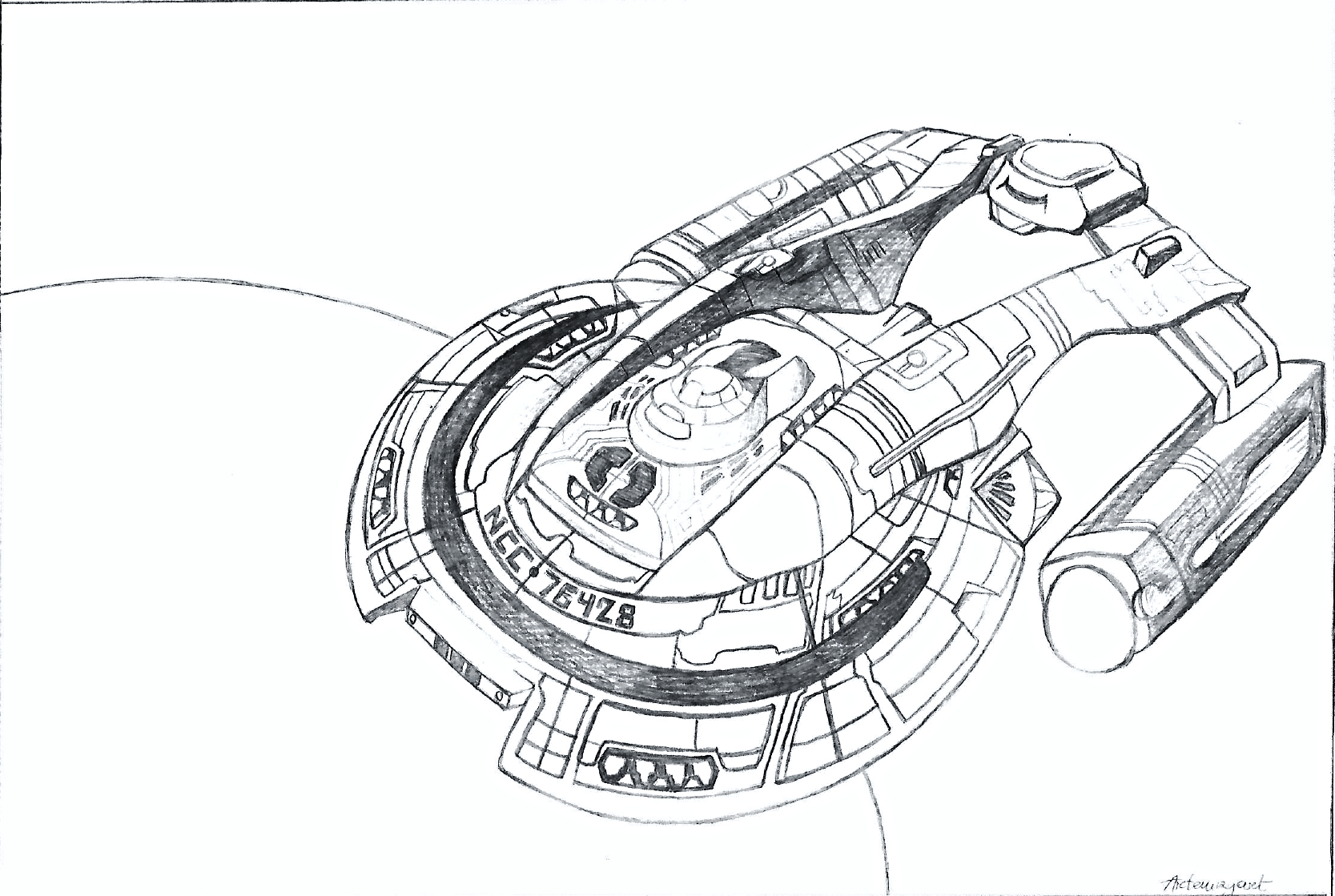 The cockpit seemed tighter somehow, threatening to close in on her. Even out among the stars the feeling didn’t dissipate. Over the past three hours Liliah tried to concentrate on her breathing, but it was the realisation that in the silence of the fighter her breath was all she had. She felt her chest go up and down as the breaths became shorter and more irregular. She took in a sharp breath through her nose and forced it out through her mouth, as she had done multiple times over the course of the past few hours. She was trying to reset, the words from Shairo in the back of her mind repeating, ‘perhaps it’s the organic component’. She tried to shake that feeling in the pit of her stomach but all she did was feel it more.

“Zabatu flight, Isoroku,” The channel suddenly came alive with the voice of the tactical officer on their main vessel, it startled the Trill flight commander, “We are detecting activity on Kalvade’s surface, launch of their vessels is imminent, prepare for incoming tangos.” there was a moment of silence, “remember the rules of engagement. No mistakes.”

“Isoroku, Zabatu one, roger that,” Liliah responded before addressing her pilots, “Zabatu flight, Zabatu one, defensive pattern gamma,” It was good to have a moment where all she needed to do was focus on what was in front of her. No time to think about her breathing, or the fact that she was about one well aimed shot away from being sucked into the void.

Responses of acknowledgement were called over the channel as the fighters around her took up defensive positions around their designated areas. The fighters formed a well coordinated blanket positioning itself between the planet Kalvade and what they had designated as Kaldial.

Flashes of light were visible on the planet and it seemed that a couple of bulky vessels were starting to make their way out of the planet’s gravity well relatively easily. A formation of five of them started to set a course for Kaldial and the fighters in between them.

“Isoroku, Zabatu one, do we have a clear scan of their weapons systems?” Liliah enquired with the crew back on their mothership, which was still in a geosynchronous orbit with the science station at Kaldial.

It took a moment for a response, “Zabatu one, Isoroku, transferring preliminary scans to your squadron now,” the holographic displays showed the bulky vessels. It seemed like their design was mostly aimed towards transport. Only limited weapons were available and most of it seemed like point defense. It was also unclear from the preliminary scan if there was any shielding technology available.

“Zabatu flight, Zabatu one, wait for them to come in range, remember we’re in a defensive pattern,” Liliah felt sweat starting to accumulate in her palms, she didn’t really look forward to having to engage them, it was abundantly clear that these weren’t going to be any challenge to them. Not like Liev’at had been. The split second thought immediately gave her an uneasy feeling in her stomach, and her head was starting to fill with a mental fog.

“Zabatu Flight, Isoroku, it would appear that the transport vessels have several dozen lifesigns on board each.” The flight control officer back on the Isoroku updated them on the new data coming in.

Liliah barely registered what it was they were saying, “do we engage?” She felt as if the controls were pushing her out of her stable flightpath, she compensated silently judging the engineers for not finding what was wrong with the fighter.

“Zabatu one, Isoroku, that’s a negative, I repeat that’s a negative, fall back into formation,” The voice of the Captain was loud and clear, and very stern. It was clear there was no room for error, and they were getting awfully close to making one.

[Meanwhile, on the surface of Kaldial]

Shairo had a engineering pack slung around her shoulder, the blue haze had dissipated and together with the XO and a medical officer they had landed in the atrium of the science outpost. Since Kaldial wasn’t anything more than a large natural satellite it was easy to spot the Isoroku above them. She tried to locate the fighter squadron but they were too small and too far away to be able to spot with the naked eye.

“We have a telescope, we can look up to the skies if you like,” Trincard remarked at the Orion engineer.

“I’m just worried, you know,” Shairo let her eyes wander around the rest of the structure. It was very sparse and seemed to be built only with functionality in mind. The only concession they had made to that was the glass dome they had beamed in under. It lead to different parts of the science station through short corridors that were made in a matte white sort of polymer.

MIndartis stepped closer to Shairo as they were headed into one of the corridors, “There is no worry, the Kalvade technology is inferior to the Federation. Up until this morning they thought speed was limited to the light”

Shairo obviously knew this, but it wasn’t necessarily what she was worried about. Even with inferior technology they were in their home turf, and they were probably convinced that what they were doing was for the best of their species. People made odd choices and dangerous decisions under those circumstances.

“Their path leads them straight to the settlement on Kaldial, there doesn’t appear to be truly offensive armament on the vessels,” Lieutenant Wu reported to the Captain down in the command pit of the Isoroku.

Kinsho nodded, he had just told their fighter squadron to back down, but it would be better to engage in the middle of nowhere rather than in orbit of the planetoid they were orbiting, “We are in their space, Lieutenant, there’s nothing we can do.” He knew they were already threatening to overstep their boundaries by doing what they’d done.

There was a long silence on the bridge as the vessels were inching closer and closer to be within striking distance of the fighters. For what seemed like an excruciating long time it seemed as if nothing was happening. Then suddenly the operations officer spoke up, “we’re receiving a hail from the planet Kalvade, sir.”

“On screen,” Kinsho immediately ordered, perhaps they were reconsidering, perhaps they realised the fact that they were not only outnumbered but also severely outgunned, “thank you for reaching out, what can I help you with?”

“You would do well to stand down, Captain, or your vessels will be fired upon,” The Kalvade leader didn’t mince words, “you have one minute to comply.”

“I’m afraid I can’t allow that, sir.” Kinsho remained calm and collected, there was barely any weapons on the vessels and no way they would threaten the squadron of Valkyrie class fighters, let alone the Akira class Isoroku.

Kinsho signalled for the connection to be cut, then immediately called out, “Zabatu flight, Isoroku, the Kalvade are about to open fire, be prepared to clip their wings and leave them stranded.”

“Isoroku, Zabatu one, roger that,” Liliah saw the image of the vessels spinning in front of her, just where they were thinking they could pull weapons from was beyond her but a threat was a threat after all, “Zabatu flight, Zabatu one, you heard the man, shields up, weapons hot.”

Right around the time that the deadline passed an artificial satellite adjusted its flight path and let loose a volley of missiles. The swarm was heading directly for the squadron of fighters and quickly overtook the five transports that were heading for Kaldial.

“Zabatu One, Zabatu Three, defensive platform identified, permission to disable,” the fighte rwing under command of Zabatu Three broke off from the defensive formation.

Liliah had wanted to say something, or make some sort of judgement, but she could barely focus on her hand on the controls, “Granted” the word almost got stuck in her throat, that’s how nauseated she had started to feel.

The away team had taken up positions around the screen connected to the telescope. Shairo had quickly conducted some calibrations and enhanced the image for them to clearly see the satellite launching the missiles. They streaked across the skies and started to get in range of the Valkyrie fighters.

It was clear that the other scientists there was very uncomfortable with both the three away team members and the fact that Kalvade was firing upon these aliens. There was a gasp when the vessels were hit with the projectiles, and then another when they came out completely unscathed.

There was only silence in return from Liliah. The missiles had impacted the Valkyries’ shields and they had barely registered on the systems. Still it had rocked her vessel, as she had taken point in the formation. She sat in an almost catatonic state staring out the cockpit window.

“Zabatu One, come in,” there was no response, “Commander Galin, what are you orders?”

Liliah looked at her shaking hands that she had pulled away from her controls, she felt the darkness come over her. Her heart racing, she didn’t want to be back in that place but everything that was happening around her pulled her back without mercy. She barely heard the calls, she never heard her name.

The away team and the scientist standing around the screens weren’t surprised by the fact that the entire engagement only lasted for a minute tops. The missiles launched didn’t affect the fighters at all, the shots fired from their end immediately crippled the Kalvade vessels. The momentum was still carrying them in the direction of Kaldial but at this rate it would probably take weeks to get there.

Shairo was still worried though, because she had seen the lead vessel taking a hit and then aimlessly drifting off following the impact. She started to wonder if there had been anything she had missed on her inspection of the vessel. She was sure that her crew and herself had been thorough. There was nothing wrong with the fighter, yet it hung there, apathetically among the stars. 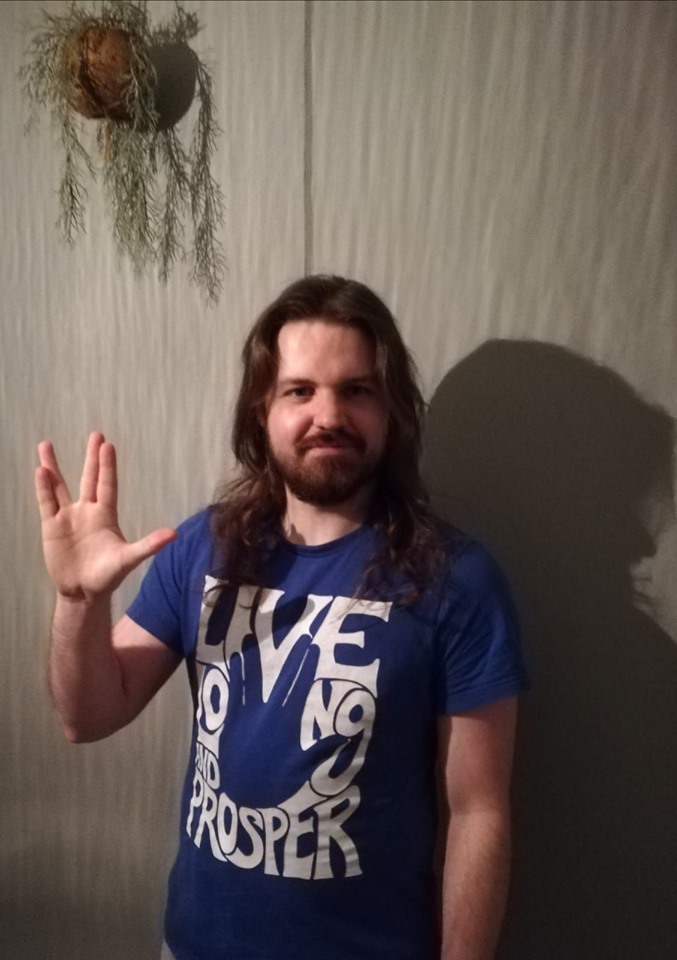