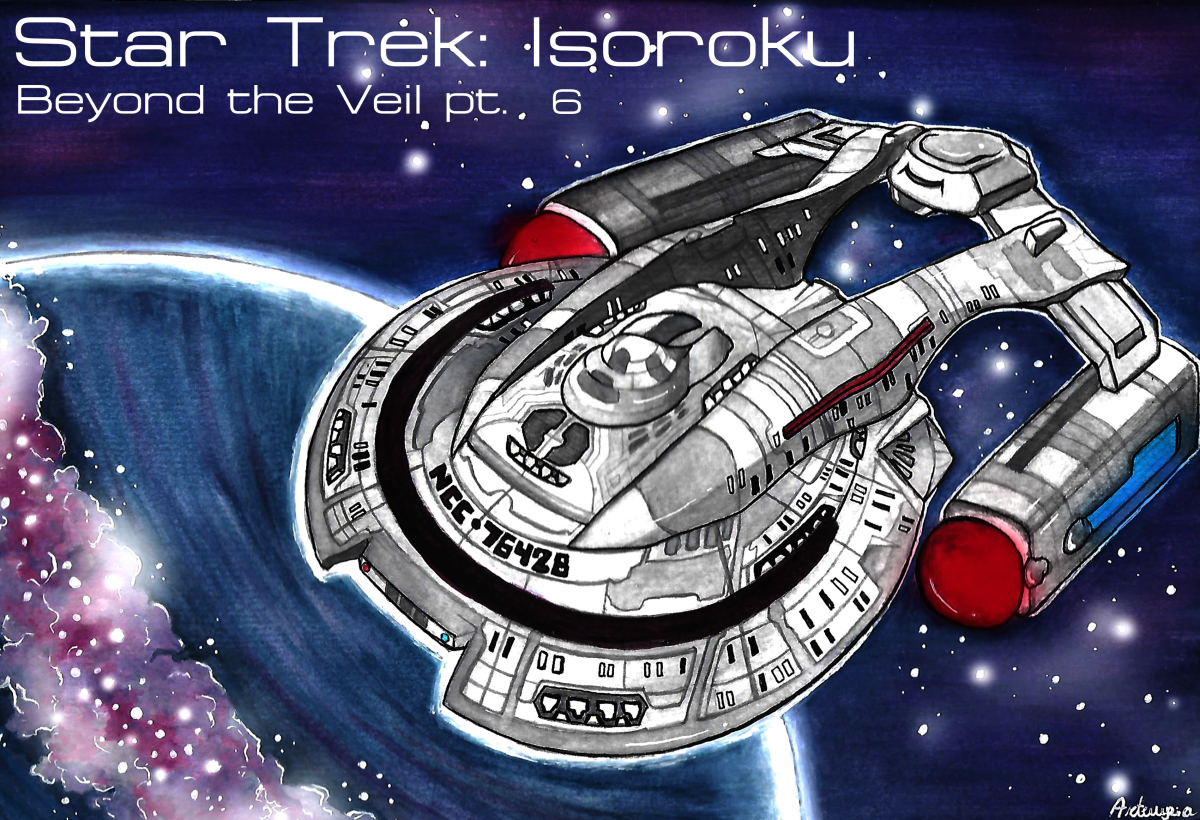 “It was touch and go there for a bit, Captain, but it seems like we stabilised them. It’s clear they’re not used to the natural laws of our universe, only way to make sure they didn’t die was to push them back into the same flux state their vessels were in” The doctor looked over at the Captain pacing in front of the brig, separated from the alien by a shimmering forcefield. The bright lighting overhead normally left very little to the imagination, but with the creature out of phase with this reality it was more of a ghostly apparition than an actual person on the other side.

“How are we making sure that they don’t just walk through the forcefield?” The Captain asked, considering all the implications of what the doctor had just told him.

“Simple, really, the new Chief Engineer modulated the frequency of the forcefield so it would kick them back into phase, just like we did with the fighters,” the attending brig officer indicated.

Kinsho smirked a bit, that Orion girl was all over the place, he knew Beau had made the right recommendation, and he had made the right call putting her in the Chief position. Even if she could get a little long-winded sometimes, “Alright then, let me talk to them. Can they hear me?”

The brig officer punched in a few commands on his console, allowing for sound to travel through, he gave a clear nod in the direction of the Captain to indicate that he could start speaking.

Kinsho turned to the brig, facing the three creatures that were in this particular containment area, “Good evening, my name is Captain Taeler Kinsho of the United Federations of Planets starship Isoroku, may I enquire as to whom I’m addressing?” He hoped to convey some weight with his introduction and his request for identification.

There was no response from the creatures in the holding cells, “They can hear me, right?” He asked the brig officer, just to be safe, the officer on duty simply nodded in response. Turning back to the holding cells he wondered how to engage with these creatures, “it seems like you’re scouts, or scientists perhaps, taking samples for whatever it is you’re researching.”

Again there was no reaction from inside the cells, “I wonder if there’s something going on that is driving you to these extreme tactics, you don’t seem to be from around here. Is there something forcing you into this behaviour?”

“The shadows hunger,” the first reply from one of the creatures, though it was wholly unclear which of the three creatures had answered the question with the ominous reply.

“What do the shadows hunger for?” Kinsho felt a chill run down his spine, the ominous words coming from nobody, and simultaneously from all three of them, didn’t inspire him with a lot of confidence.

“We come from beyond the veil, the shadow hungers. There is no escape.” again no clear source of the sound.

“Well, you might have noticed that we were able to circumvent your ship’s defenses and as a result capture you and some of your colleagues. Are you part of the shadow? Do you work for it?” Kinsho was sure it was a quirk of the translation system, but as long as they were talking they could get to working out the kinks.

There was an odd sound, this time in three clearly distinct variations, coming from each of the occupants of the cell. It could be construed as a laugh, if one imagined vocal cords made of sandpaper, “Beyond the veil the shadow is everywhere.”

[In the meanwhile, on the outer hull]

Shairo tried to keep her breathing level, she had to keep telling herself that this was perfectly safe. She had a teleporter transponder on her and the mag boots had her stuck to the hull underneath her feet. She needed to get this done quickly as well, because sooner rather than later the invaders would come back and punch a hole in their reality and start kidnapping people again. She just needed to focus on the shield emitter in front of her, and the work she needed to do to make sure it got back to operational standard.

“Is everything alright, Lieutenant?” The engineer next to her looked at her through the matted glass of his space helmet.

Shairo nodded, the suit covered most of that movement up, “Yeah. Yes. Of course. Why wouldn’t I be?” She shook her head a bit to clear her mind, it hadn’t come out convincing at all. The emitter had blown out with significant force, it had done more damage than she had anticipated but it still was something she would be able to fix relatively quickly, “can you hand me the hyperspanner?”

“Oh.” She looked at the tool in her hand and laughed a bit meekly, “I mean the ODN recoupler.”

“Of course, ma’am,” He reached and took the hyperspanner back and handed her the ODN recoupler.

“I’m not really at ease in an EVA suit,” Shairo started to focus back on the emitter on the hull, “it’s just a small bit of transparent aluminium between me and the vacuum of space. I really shouldn’t be talking about this, thinking about it.” She finished her work, “Can you check the readouts now?”

The engineer that had come with her looked at his tricorder, “That helped some, but there’s still a couple of wires shorting out,” He tapped a couple of buttons and then sent the results to the heads up display in Shairo’s visor, “the updated status.”

“I see,” Shairo sighed a bit, looking over the read outs. Whatever she had done had helped but not in the way she had expected. The main issue of wires being crossed and shorting out still remained, “how about we just go into the next encounter without any shields? You just know that the Captain will expect me to blow these emitters again.”

“Well we have more time to prepare the phaser banks and even a couple of torpedoes now, so I don’t think it’ll come to that.”

“Maybe.” Shairo wasn’t so sure, the stunt they pulled knocked out a great deal of them in one fell swoop. Perhaps that would be needed again in the upcoming engagement. She continued work on the emitter array, hoping to get it back up and functional before the ship wanted to jump to warp. She didn’t want to be the reason they arrived late at the next incursion.

“If that’s how you feel, we could also take some shortcuts, get the job done quicker. Within specified safety parameters, of course.”

[Back in the brig]

After the initial exchange, they had only repeated the same platitudes in different versions. In a way the Captain was glad when his commbadge chirped, indicating an incoming message, “Bridge to Captain Kinsho, we’re receiving a hail coming from within the Rangalor system, sir.”

Kinsho wondered why he was being asked to report to the bridge for a hail from one of the nearby colonies, “Can you please ask the first officer to take the communication? I’m kind of in the middle of something here.”

“I did, sir, It appears to be a message from Lieutenant Commander Galin, I think you’ll want to hear this.”

Before Kinsho could respond the channel opened with a bit of a pop and crackle, he indicated to the brig officer to cut the sound in and out of the holding cells.

“Starship Isoroku, this is Lieutenant Commander Liliah Galin, 246-01-4723, Born Stardate 48337.4, I speak to you on behalf of the Liev’at, we require 23.728 of your Trill citizens. We wish to come to an amicable agreement on the terms of our exchange.”