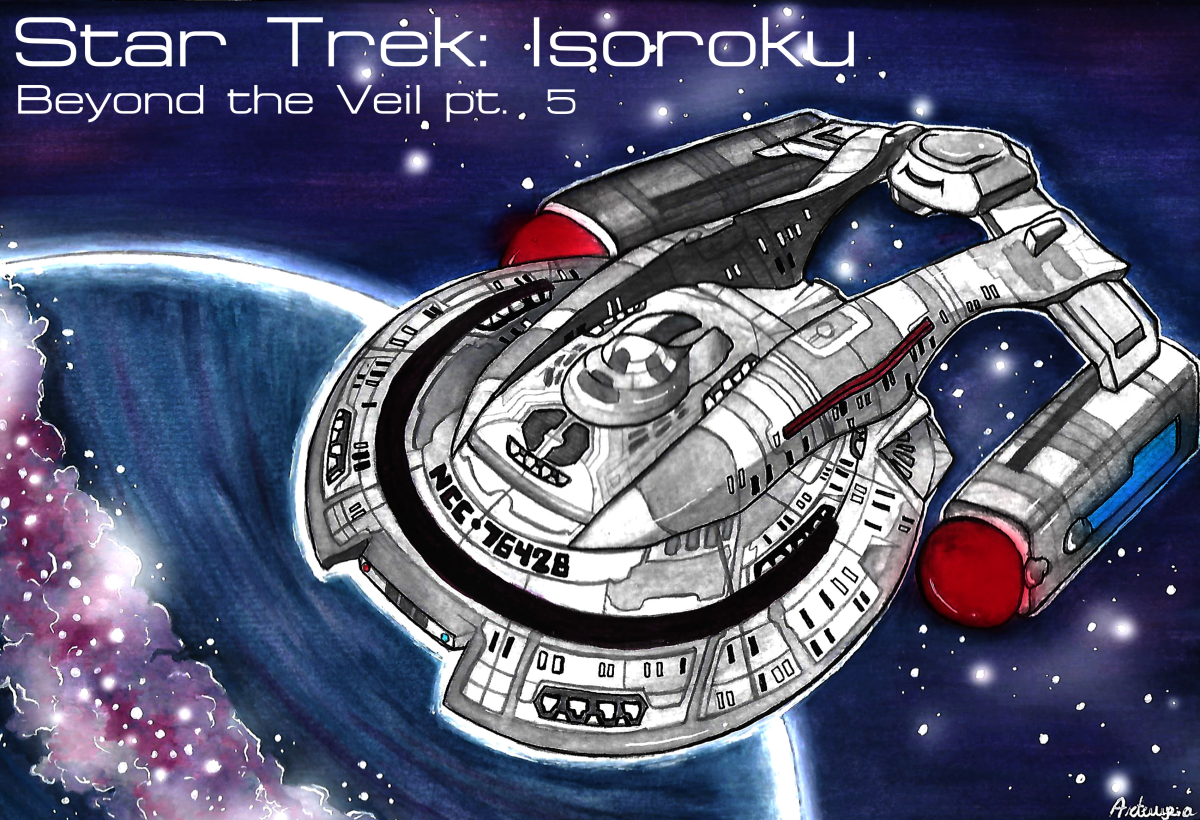 “What do you mean no longer in the cockpit? You mean we pulled her out in time?” The Captain couldn’t believe what he heard, he hoped that he had simply misunderstood the Ops officer.

There was an uncomfortable silence that lingered for a bit too long on the bridge. With a small swallow the Ops officer looked back over to the Captain, “No sir. Her personal transponder vanished seconds before they could pull her out. Her and three other fighter pilots.”

“Just three?” Another moment to be confused, “Why did they stop at three?”

“Ten percent.” StCroix spoke up from the behind the science station.

Turning on his heels Captain Kinsho looked at the human scientist, “Excuse me?”

“They reached ten percent.” Nicholas pointed at the main viewer that showed the unknown vessels retreating back towards the anomaly that they had come from.

Following the pointing finger the Captain saw exactly what his Chief of Science meant, “Get us in their path.” He looked over at Shairo, “How long?”

“I’ve dispatched a team to make the final adjustment to the emitter array. As you can imagine this is not something we have patched in to the programming. They’re meant to shield us from incoming energy, not gener-“

“Three minutes” Shairo felt her cheeks become warm, knowing she was blushing heavily. She should really stop with the engineering lectures.

“Lieutenant Wang, get me one of those creatures to talk to.” He pointed at the craft that were coming closer and closer into view.

The tactical officer simply nodded, “We have containment bays ready, sir. If we can disable their phasing system I’m ready to reel them in.”

Liliah felt her heart race, her senses deprived of any input in the pitch black except the distant echoes of panic. She couldn’t hear what language they spoke, let alone the exact words being spoken. She figured the voices belonged to the earlier kidnapped Federation citizens. She took in a deep breath, despite the small confined space the air was surprisingly fresh. Something was allowing airflow.

There was not a sliver of light available to navigate by, and with the complete lack of gravity it was impossible to tell which way was up. When she and her pilots shot out of the Akira class’ hangar bay there was always a second of weightlessness between the starship providing gravity and her fighter taking over. It gave a feeling of euphoria, freedom. This was the exact opposite.

Drifting in the direction her head was facing she tried to grab on to something. Instead she felt a cold, stonelike, structure to the box she was occupying. She pushed herself off the small wall over her head, using her legs to kick down. All it accomplished was shooting her back up. Luckily she was prepared otherwise she would’ve hurt her head. Now it was just her lower arm that was bruised. She tried again, to no avail.

“We’re in position Captain,” the call came from the Flight control station in front of him. Kinsho looked over at the Engineering station still occupied by Shairo.

Shairo nodded at him, “Emitter ready, sir, control available to the Tactical station.” It had been a very crude implementation of the idea, and it was going to kick like an Andorian klazh. She had already prepared three damage control teams to deal with the backlash.

Kraven Wang nodded at the Captain and the Engineer. He was ready for when the call would come.

“Alright, let’s see how much they like it when we can see them properly,” Kinsho put his hand up indicating that Kraven should be ready at a moment’s notice. He waited for the small craft to come nearer to the Akira class starship. He didn’t know the effect range of the pulse they were about to fire, Shairo couldn’t be sure. Just as the craft were starting to veer off to avoid coming into the path of the comparatively massive cruiser, the Captain’s hand shot downward, “fire.”

The shields around the Starship lit up in a bright blue, right before it folded away and washed over the oncoming swarm of small fighter craft heading in the direction of the anomaly. The distinct shimmer of their phasing tech stopped seconds later. It was clear that at least a dozen of the ships had been dislodged.

“Break their shields, get me someone I can look in the face.” The Captain paced back and forth in the command well of the bridge.

“They don’t seem to have any, sir. Locking on transporters now.” The call came out from the Ops console. There were some of the craft that suddenly veered off course and then drifted aimlessly, the others used some sort of speed boost to close the distance with the anomaly and started to disappear one by one. After all was said and done eight of the alien pilots had been caught.

“Can you get me one of those vessels to study?” Shairo had walked over to the railing overlooking the command well and the main viewer.

Kinsho looked back and gave a smug grin before turning back to the operations officer, “grab a couple of their vessels for further examination by our Engineering department, Ensign.” He then turned to Kraven, “Lieutenant, you’re with me, let’s see what they have to say for themselves.”

Liliah had fruitlessly launched herself at the bottom of her box a couple of times now. The results had been the same as the first time she had tried and by now her arms were starting to hurt. She didn’t give up, though, that wasn’t in her nature. As she launched herself into the bottom again she suddenly felt movement around her. Just as she was about to try again the top was removed from her confinement.

There was very little light, but with her eyes so used to the pitch black it was actually quite easy to discern some features on the creature. There were four eyes looking at her, rather catlike in nature, set in an elongated skull. Long braids of hair covered the top of the head, bound with a metallic ring. Something was covering its mouth, some sort of mask or respirator. That was a weak spot. Liliah immediately swung a fist at the creature.

An arm came up to protect its face, it turned away and shouted something in a language unknown to Liliah or the universal translator. Two more of the creatures approached and grabbed on to her flailing arms forcefully. They spoke to each other, ignoring her as one of them started to run a device over her body. She twisted and turned, trying to get away from the device. She was strong, kept in shape, but the two were simply too strong. They also seemed to be wearing different clothes to the one that was conducting the scan.

The creature stopped moving the scanner when it reached her abdomen. She tried to twist, to get away from whatever it was he was trying to do. It didn’t seem to matter much. He exclaimed something into the wider room, the doors immediately opened, two others stepped in. One seemed a little more lithe and diminutive, the skin was in more muted colours, less extravagant, perhaps a different sex or phenotype. This creature leaned over, locked eyes with Liliah, “What are you?” The sentence seemed artificial and out of sync with the movement of the lips, clearly the work of a universal translator.

“Liliah Galin, Lieutenant Commander, 246-01-4723, Born Stardate 48337.4” Liliah gritted her teeth and prepared for whatever torture they would feel was necessary to extract information. She was not planning on giving them a shred of useful information.

“Your species. What creature are you?” The devices that the creature held bleeped once more, they punched in some combination of buttons, seemed to nod and look at the other creatures in the room.

“Where born, lived where, coordinates?” There was an unintelligible exchange between the creatures that were hovering around her when suddenly the one that had been examining her pulled aside her uniform top, exposing her abdomen.

“Worry not.” There was a cold sensation before the pressure of a blade parted the skin on her stomach, right where the surgeons would make an incision during a joining ritual.

Not wanting to give them the satisfaction of a scream, Lililah repeated herself through clenched teeth, willing the water culminating in her eyes to stay put, “Liliah Galin, Lieutenant Commander, 246-01-4723, Born Stardate 48337.4”