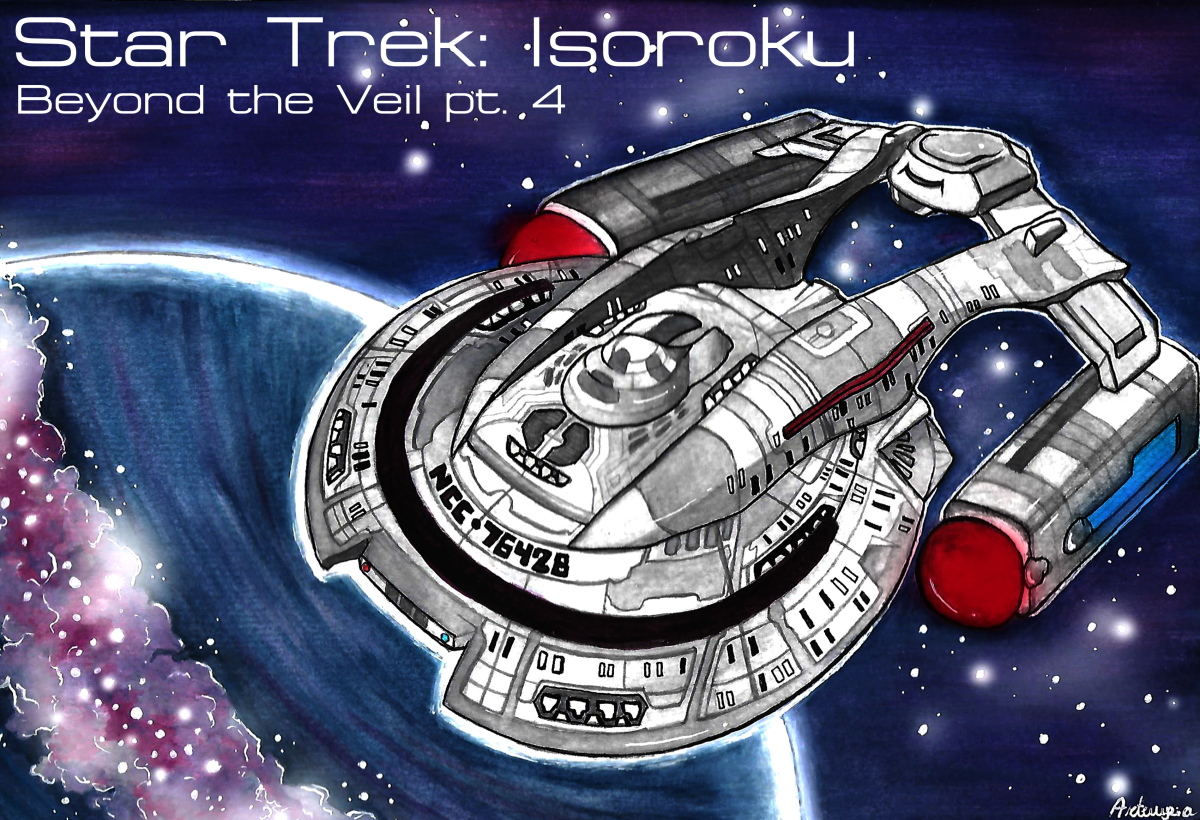 The lead craft of unknown origin took a full volley of phaser cannon fire. There was some shielding on the plane, and it was visibly struggling to keep up. The shimmering stopped.

“Zabathu seven, Zabathu one, are you seeing this?” Liliah sounded excited as she checked in with her wingman, “give it a shot, it seems like we nailed this bogey.”

“Zabathu one, Zabathu seven, roger that, firing weapons,” Another volley of phaser fire immediately erupted from the Valkyrie class fighter that was flying right off of her right wing. The shots landed, it seemed as if the initial barrage had knocked the bogey into phase with them.

“Now things are finally going to get interesting,” Liliah narrowed her focus and fired another volley, this time on the second plane in the bogey’s formation. Same effect. The shields on the craft lit up, the vessel seemed to get forced into their reality and there it was. Clear as day.

“Zabathu flight, Zabathu one, it seems like us lucky few can help you find something to do today after all. Once tagged the bogeys become tangible. Engage the enemy, attack pattern Delta.”

Three of the enemy fighters broke off from their flight paths and started to circle back around to Liliah and her wing, when lined up blue light erupted from the craft’s noses. It was clear their aim was to take out the flight commander’s craft. The energy blasts colliding violently with the imperceptible energy barrier protecting her.

“Akira Main, Zabathu Flight, the craft are returning fire, engaging bandits, weapons free, firing at will,” Cracking her knuckles Liliah lined up another shot, answering the violent barrage that was pummeling her jet with a volley of her own.

“Lieutenant, calm down, Commander Galin knows what she’s doing,” Kinsho was starting to think it might have been a mistake to bring the young Orion engineer up here, “calm down and focus, is there any way we can use this new-found knowledge against our adversary? Something we might be able to do with the deflector dish? Or a torpedo? ECM?” He looked around the rest of the bridge, he didn’t care who came up with a plan, he just needed one and he was out of his depth when it came to subspace physics.

“The hits by the fighters are pushing the craft into phase with us, for however long that lasts we can hit them with our own weapons, sir,” Lieutenant Wu spoke up from behind the tactical console.

“That’s a start, excellent, fire at all available targets,” He then turned to his operations officer at the front of the bridge, “Any response to our hails?”

The Ops officer simply shook their head, “No sir, none. The surface is still reporting people disappearing, they’re up to seven per cent.”

“Commander StCroix, find me an application for this newfound intell, asap,” Kinsho was a patient man, but right now he needed a quick solution. It didn’t matter if it was clean or dirty, so long as it was effective.

“There’s one piece o’ tech on this ship that could use the frequency without an extensive engineerin’ overhaul,” StCroix looked over at Shairo as he made some sort of unspoken suggestion.

“Are you serious?” Shairo her eyes widened, baffled at the suggestion.

“Yeah, it would work,” Shairo couldn’t quite figure out if the Chief Scientist was fully serious, “and we’d be sitting ducks for about two hours after it worked.”

“Can either one of you please explain to me what’s being suggested?” Kinsho had trouble keeping up with the unspoken technical debate.

“Commander StCroix is alluding to the shield emitters, sir, they have the same frequency cycling emitters that we used to augment the Valkyries. Theoretically we could set it to the right frequency,”  Shairo pointed at the console in front of her, that still had all six of the fighter planes displayed on them, clearly indicating that they were being pummeled by the unknown craft, “and create a shockwave.”

“It would force the attackers into phase with us.”

“It would fry the emitter. I would need to get someone in an EVA suit with an angle grinder and a welding tool to scrape whatever is left of the emitter and replace it with a freshly replicated one.”

“But then every bird in the sky, every ground defense battery, every one of our very own phaser banks, can lock on to one of those craft and disable them.”

“Will it affect the subspace anomaly?”

“There’s no way to know sir, subspace is very unpredictable, we barely manage to understand enough of it to navigate through it like we tend to do.” StCroix looked at the readings coming from the anomaly hanging over the colony like the sword of Damocles, “I guess, if we could give it some extra kick…”

“Are you serious? Are you actively trying to fry every EPS conduit between here and holodeck three?” Shairo was baffled at the callous suggestion, “We’ll be left without forward shields.”

“Do it.” Kinsho left very little room for negotiation.

Shairo couldn’t believe what she was hearing, she wondered if the Captain had heard the fact that it would blow out their shields, “But sir! Our shi-…”

“Lieutenant Shairo, we weighed our options, we are aware of the risks and consequences.” Kinsho turned and looked at her, “Now, I gave an order, please make it happen.” The Bajoran captain then turned away towards the flight ops in front, “Can you get us in closer? I need to make sure we hit all of them when we do this.”

The Orion engineer shot daggers at the human scientist with the weird accent, Shairo hated going into an EVA suit and she just knew that she was going to be the one that was going out there and fix the mess they were about to create, “Aye-aye, Captain.” She hadn’t slept since they detected this second anomaly and now she was absolutely positive she wouldn’t sleep for the next thirty-two hours either. Her hands started to fly across the controls, rerouting power, overriding some of the safety protocols to abuse the shield emitters in the fashion that Commander StCroix had suggested.

All Nicholas did was give a smirk and wink back.

“Akira Main, Zabathu One, I think they’re getting wise to our m.o., taking heavy fire, shields close to failing, please advise on R.O.E.” The voice of the Isoroku’s Flight Commander rang through the otherwise relatively quiet bridge.

“Tell them that the rules of engagement are unchanged. They are to disable, I don’t want any casualties, Ops, keep a transporter lock on the pilots, if their shields fail I want them out of there.” Kinsho didn’t want casualties on his side either, but there was no communicating with their unknown adversaries and so there was no way to know what was driving them in their attacks on the colonies. They needed to establish dialogue, and with that find a way to resolve this.

There was a moment of silence, “Akira main, Zabathu one, copy that.” It was audible that Liliah wasn’t pleased with the orders, but everyone knew that she was a professional. That she would be the last one to disobey such an order.

“Zabathu Flight, Akira Main, be advised that your escape hatch is still available, no ECMs, if shields fail, we’ll get you out.”

“Roger that, Akira Main,” Liliah was about to add something else when a coordinated attack on her fighter was carried out by a trio of bogeys, they ripped through her shield, “Shit! Shield down, hull integrity 98 percent. Cover me boys, befo-..” the comms went dead, just cut out.

“What happened? Did we beam her out?” Kinsho turned to the Operations officer, they silently shook their head in return.

“No sir, but…” The ops officer seemed reluctant to relay the information in front of them, “Commander Galin is no longer in the cockpit”

The room was dark, it smelled of ozone. Liliah couldn’t really tell which way was up, floating weightlessly in the middle of an unlit box. Right after her shields had failed one of the Bogeys had come back around and headed right for her, the colour of its energy weapon had shifted, that’s when she felt the familiar sensation of being transported. She had expected to appear in the Isoroku’s transporter room, instead, she was suspended in midair, in a room with no door, no window, and the sound of pleading cries in the distance.