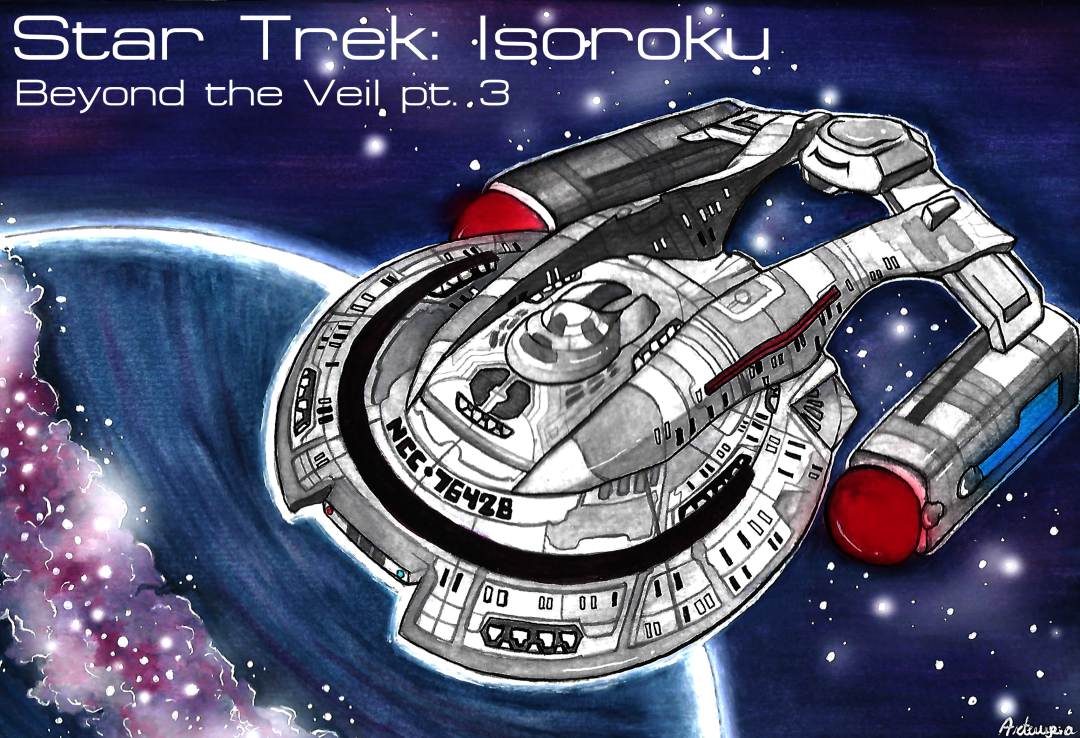 Beyond the Veil, pt.3

There was a huge chronometer displayed on the hangar bay wall, Shairo had tried to ignore the ominous count down as she worked through fitting the Valkyrie class fighter with the updated phaser cannons. “Hyper spanner,” she called, hand held out towards the petty officer that was standing close by her. She felt the cold metal of the tool pressed in her hand.

“Lieutenant Shairo, I am going to have to ask you to leave my office,” the voice belonged to the Trill flight leader, Liliah Galin.

“If you want to be able to ‘work on your administration’ you’ll give me five more minutes, Commander.” Shairo didn’t move from her position under the fighter’s nose.

Liliah squatted down next to her and looked up under to see what the Engineer was working on, “I need to do an extensive pre-flight check, you promised me you’d be done by now.”

“Can’t you just, I don’t know how you’d say it, lick the fires? Just leave me alone for a couple more minutes.” She should’ve known better, Beau had taught her better. Always under-promise and over-deliver.

“Kick the tires and light the fires?” Liliah shook her head, “I know you’re super spooled up for the fact that you get to call the shots now, but I need to be sure that if I take this bird out in the black that it still does all the things I need it to do, when I need it to.”

Shairo didn’t respond, she had been clear on how much time she needed and this wasn’t helping her complete the task any faster.

Liliah straightened up again and walked over to the ladder leading up to her cockpit, “I’ll get nice and cozy, please let me know when I can go through the motions.” There was only an icy cold silence in return.

That silence was broken when the PA system in the hangar bay came online, and the Captain’s voice started to speak, “We are fifteen minutes away from the Esrict system. This is a yellow alert, all crews, please report to alert stations. Arrival at Esrict, t-minus fifteen minutes. Bridge out.”

“While you’re up there, Commander, you’ll find an additional button on your flight stick,” Shairo waited for the confirmation from the Trill pilot, who gave some sort of growl in response, “clicking that will select a random phase shift for your phaser array, one that wasn’t selected by one of the other five fighters equipped with this tech.”

“So you’re telling me that we’ll only have six birds out there that have about as much chance of landing a hit as beating the house at a dabo wheel?” Liliah called back from her cockpit.

Shairo was quite sure that the flight commander didn’t like those odds. “Yes. That’s what I’m telling you, ma’am,” she slid out from under the fighter’s nose, having closed everything back up and making sure they were vacuum-tight seals, “but look at it this way,” she wiped her hands on her uniform, “at least we’ve got latinum to put down on the table now.”

The tension on the bridge was palpable. The Isoroku had arrived at the system before any incursion by the unknown vessels was detected and now they had taken up a position between the subspace anomaly and the colony.

Captain Kinsho sat in the centre chair and looked at the widescreen of the main viewer. Jaws tense. When the anomaly flared up he held his breath. “Tell the fighter squadron to move in,” after giving that order to the tactical officer he looked over at the Engineering station, where he had requested his new Chief to take up a position for this engagement, “let me know if we find success, lieutenant.”

“Aye-aye, Captain,” Shairo’s eyes were glued to the readouts coming in from the six fighter planes they had equipped with the variable phaser arrays. As soon as one of the pilots reported a hit they would have to send all of that through to the other five fighters.

“Zabathu flight, this is Akira main, you are free to engage,” Lieutenant Wu relayed the order he received from the captain.

“Akira main, Zabathu one, roger that, engaging bogeys, weapons hot.” The voice of the Trill flight commander was clear, steady. It seemed as if she was the only person in this whole crew that knew something they didn’t.

Shairo caught herself biting on a nail, she just hoped this worked. They had to find a way to hit these bastards before they could take another sample from one of their colonies.

“Akira main, Zabathu one, we have visual on bogeys,” A beat, “Zabathu one to Zabathu flight, weapons free, fire at will.”

The bridge went quiet. There had been no time to make the necessary adjustments to the phaser arrays on the Akira class Isoroku. So they were just sitting there, like an audience watching a play. The small Valkyrie class interceptors started to tangle with the unknown vessels. Everyone watched with bated breath.

Volleys of phaser cannon fire ripped through the dead quiet of space, missing the invading vessels as if they weren’t even there.

Shairo looked at the readouts on her console. They were cycling through possible frequencies at rapid pace but she knew that even at this rate they’d need to be in combat for the next two days to guarantee a hit, and that was not even taking into account pilot error. Cycling through to a next frequency flagged it as ineffective, double tapping or simply thinking you hit when you didn’t, could mean they skipped right over the frequency that would’ve worked. It was frustrating. The piece of nail from her thumb she had been chewing on split from her finger. She winced.

So far none of the fighters had reported a successful hit.

The calls kept coming in. The frustration getting more and more audible with every report.

Frustration in the voice of every single fighter pilot, in all of them except for one.

“Akira main, Zabathu one, no joy, cycling.” Liliah her voice was as even and undeterred as when this whole thing started.

Captain Kinsho had gotten up from his seat and was now pacing the breadth of the command pit in front of his chair. The laser play in the main viewer didn’t do anything to ease his mind. They weren’t hitting anything and the incursion was steadily but surely approaching the colony below.

Liliah switched to a private channel, “Zabathu four, Zabathu one, keep your professional opinions to yourself, understood?” She quickly switched back, she didn’t want to hear his apology or excuse, simply clicked the button to cycle to a new frequency and let loose another burst. Passing right through the lead vessel of the alien convoy. She took in a sharp breath through her nose, “Akira main, Zabathu one, no joy. Cycling.”

Shairo was starting to chew on the nail of her other thumb, “Come on, work,” she hissed at the display.

The unknown ships were now entering the colony’s atmosphere and it seemed as if there was nothing they could do to stop them. Reports were starting to come in from the surface. People that had been sequestered in shelters, where they were available, were starting to simply disappear. As if they were transported away without so much as a courtesy of a blue haze.

Kinsho stopped in his tracks and turned at the viewer when he saw it. One of the ships. One of the unknown alien ships suddenly lit up. Like a nebula filled with helium simply caught a spark.

Shairo’s hands flew across the controls and she quickly made sure to isolate the frequency. She couldn’t believe their luck, she heard her father’s voice in the back of her head tell her she should buy a ticket to the Bolian Lottery next week. “Tell them I’m sending the frequencies over to the other fighters. The six we equipped.” She sent out the update to the other fighter planes, her console updated and they all gave her the green light. They were all aligned now.

“Zabathu flight, this is Akira main, frequency narrowed down, Zabathu one through six’ equipment updated. Fire at will.” Lieutenant Wu conveyed the message.

Liliah’s eyes narrowed and her smile broadened, “Zabathu flight, this is Zabathu one, we have our fangs back,” she put the lead vessel in her sights and squeezed the trigger of her phaser cannon, “Alpha Mike Foxtrot!”