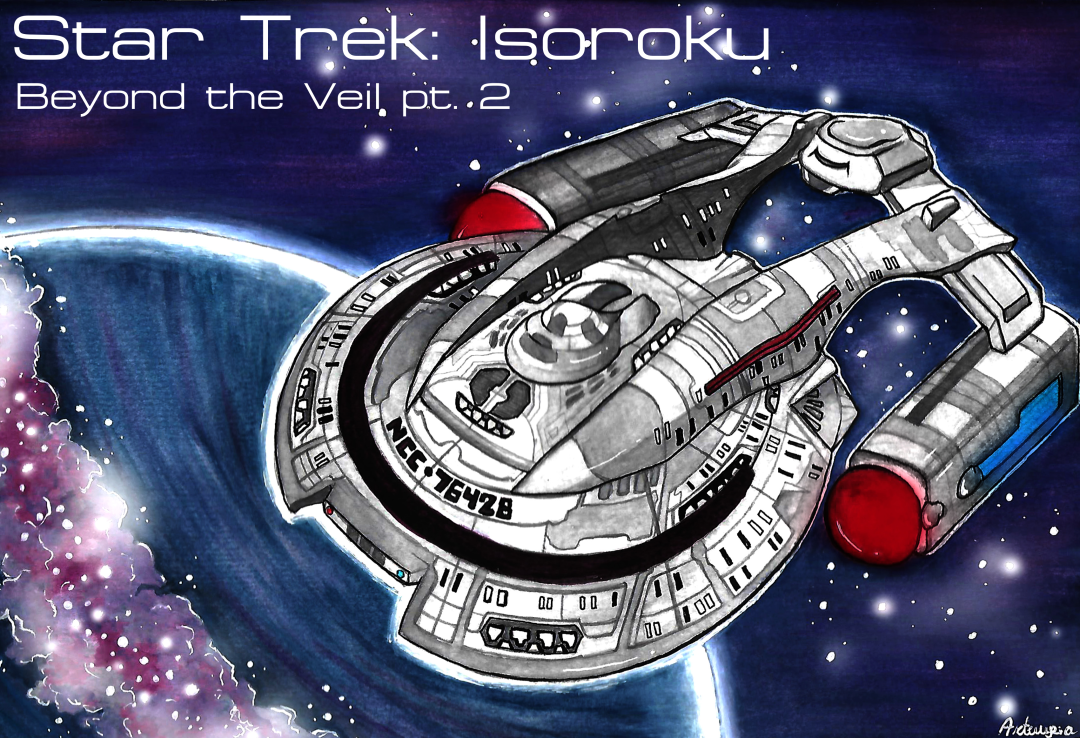 “Please tell me you’re seeing this!” Liliah her voice was loud, angry even, but not panicked. Her starfighter was aimed directly at the bogey. The alien space craft had a bluish hue, its metal skin reminded her of the beetles on her home world. The bolts shooting from her phaser cannon lined up perfectly with the centre mass of the vessel, and they simply passed through it. It was as if the unknown craft wasn’t even there.

“Zabathu One, Akira Main. Confirmed. Shots on target. No joy.”

Liliah’s hands gripped around the stick just that much harder, jerking the fighter around and looking for another vessel to put in her sights. From the moment reports were coming in from the surface that people were disappearing as the vessels streaked over, the squadron had been racing to catch up with them, and now that they had, there was nothing they could do. It frustrated her to no end, she took a sharp, deep breath and regained her composure, “Akira Main, Zabathu One. Keep your sensors trained on me, I’m going in for another round.”

“Zabathu Two, Three, attack formation alpha. Let’s get the eggheads some ELINT to work with.” Liliah ordered as she got another one of the aircrafts in her sight. It couldn’t be much bigger than her own jet. There was no way the unknown vessels were keeping the people on board. There was barely enough space for one humanoid, “Bogey padlocked,” she took in a deep breath and stared down the targeting rectangle on her HUD before squeezing down the trigger, a stream of photon blasts tearing through the sky, again hitting the unknown vessel dead centre, but it continued on unaffected. It barely even seemed to respond, aside from a slight shimmer on the points of impact.

Then, suddenly the band of alien craft seemed to respond to something, as all of them started to climb back up towards the stratosphere. Once out in the cold black of space they made a beeline towards the subspace anomaly. They were getting closer, the Valkyrie fighters that were launched from the Isoroku tailing them, each training their weapons on their own targets. Some of them still firing their orange bolts of energy. All of the alien craft equally unaffected. One by one they started to disappear into the hole.

“Zabathu One, this is Zabathu Nine, targets heading back to anomaly, please advise.”

The call for clarification snapped Liliah from her own ruminations. She had no clue as to what the hell just happened, they had been ordered to protect the surface settlement and for all their efforts there was nothing to show for it. She pushed her throttle down in an effort to catch up with the unknown craft and perhaps jump through the anomaly with them.

Liliah balled her fist and slammed it into the side of her cockpit frame, she bit back some strong words before taking another cleansing breath, “Akira Main, Zabathu One. Copy that. Zabathu flight, returning to base.”

The relevant senior staff members had gathered around the large oval conference table. A holo representation of the small craft that had swarmed the colony yesterday appeared to float slightly above it. Turning around its axis slowly.

At the head of the table Captain Taeler Kinsho sat, two fingers pinched around his wrinkled nose, “Alright, I know it’s early days still,” he looked up at the gathered men and women, the newly minted Chief Engineer sat closest, a couple of chairs behind her a seat was taken up by the Chief Scientist on the ship, Nicholas StCroix, across from him sat Lieutenant Kraven Wu, the Chief Tactical officer. Slightly further back still flight commander Liliah Galin was seated, “but I’d like to know what we have so far.”

The senior staff members exchanged glances, it was apparent that nobody really wanted to go first. StCroix cleared his throat and leaned forward a bit, “Well, ehr, y’know,” his southern accent clearly sounding through, “we’ve looked at the sensor readin’s, and… eh.” He shook his head, “there ain’t nothing much to go off of.”

“We’ve got to have something. Nearly a tenth of the people on that colony disappeared, Commander.” Kinsho remarked.

Shairo choked back a remark in her throat, coughing a bit as she did so.

“What is it, Lieutenant? Feel free to speak your mind,” Kinsho knew she was new here, but also was confident in her abilities, if there was something she wanted to say, he wanted to hear it.

“Not nearly one-tenth, Captain. Exactly ten percent of people disappeared.” Shairo looked at him with apologetic eyes. She knew how much she could annoy people with her corrections.

“And what does that mean exactly?” Kinsho looked at Nicholas for an explanation, shrugging slightly as he did so.

“It means that it wasn’t a military strike, Captain.” The tactical officer across the table weighed in, he leaned back in his chair and had his eyes trained on the holographic representation of the craft. It had been difficult to piece one together with the lack of sensor readings, and they needed to go off of visual reports by the fighter pilots, but they ran the hull configuration through the database and hadn’t found a single match, “Whatever their intentions, it wasn’t to strike military targets, or high profile citizens.” He shook his head, “for all we know these were just unmanned drones, doing a flyover, tagging a random sample of people to be taken.”

“Unmanned would make sense. The craft didn’t seem to be in sync with us, almost as if they existed out of phase with our reality.” Shairo looked over at the others at the table, “the tech required for that is possible, in theory, but would need a lot of power, and the craft would barely be large enough to contain an engine large enough to make that possible. Let alone the kind of stresses the space frame would be under if they were to be exposed to that on a longer term. Not to mention the effects on an organic insi-“

“There was a pilot in there.” It was the first time the Trill flight commander in the back had spoken up during the discussion, interrupting the Orion engineer.

“I’m sorry?” Shairo asked, looking over at the back of the room, taken aback by the sudden interruption.

“There was a pilot inside that craft, the way it moved, the way it responded to our presence, it was clear there was an organic mind at work.” Liliah leaned back, “what we really should be focusing on, however, is how are we going to make sure that the next time I’ve got one of them in my sights, I can actually shoot it out of the sky?”

“Well, ehm, you ain’t hittin’ nothing as long as yer cannons ain’t aligned with their particular phase shift, sha,” StCroix stepped in to protect the new member at their table from the heat coming from the flight commander, “in order to do that, you’d need to cycle through thousands of possibilities.”

“Something your cannons can’t currently do without coming back to base after every shot you fire,” Shairo offered, “but there’s something I’ve been working on, something that might help us accomplish just that.” She threw up a redesign of the Valkyrie class’ phaser cannon array.

“Wow, hold on now, before we start taking my office apart, how sure are you that this will work?” Liliah stood up from her chair to lean in and see the proposed redesigns.

“The modifications are sound,” StCroix looked at the schematics proposed by Shairo, “so it ain’t a matter of ‘if’ it works, it’s a matter of ‘when’ it’ll work. The more fighters we can equip with this, the quicker we’ll find the right frequency.”

The doors to the conference room suddenly slid open, the Captain’s yeoman stepped inside, he gave a quick, crisp, salute before stepping fully inside the room, “The XO sent me over, sir, he wanted you to know that another anomaly has been spotted over in the Esrict system, course is laid in, we’re heading there at maximum warp” The stars outside started to streak as the vessel jumped to warp and everyone around the conference table jumped up from their seats.