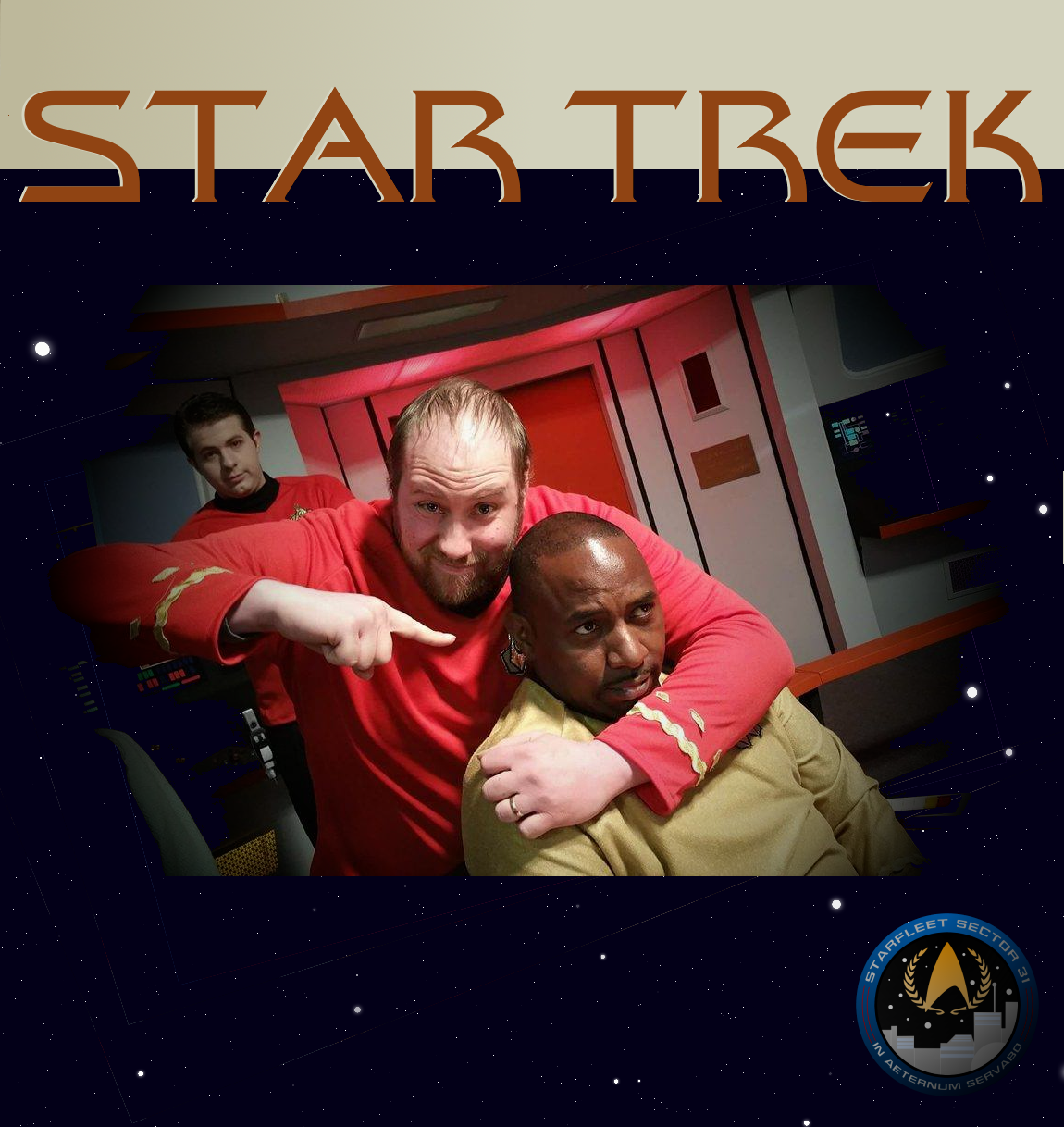 Who are you?
Well, my name is Vance Major, but Facebook has me listed as Vance Major Owen. In their infinite wisdom, they didn’t believe I was real, so I had to prove I was who I was, and they got my last name and middle name mixed up and I just gave up and let them win that day lol but I am Vance Major.

Where have we seen you before?
I’ve been in several fan films. From what some have dubbed “The Minard Saga” which is about 36 fan films, to the “Constar Chronicles” which is 40 fan films, I have also appeared in Starship Valiant’s films, Starship Antyllus’s films, Dreadnought Dominions films, and The Avalon Universe, as my character, Erick Minard.
So I show up in just about any random place in the fan film forum. lol

Why did you start making Fan-films?
I was asked to be the engineer on Starship Valiant, and I enjoyed doing that so much that I wanted to stretch out and explore the character more. So I asked Michael L King if I could do some short films with my character and he said “sure.” Micheal is very cool like that, and after a certain point, I took the character from the TOS era, and into the TNG era, so I could tell more stories that wouldn’t affect the things he was doing. Which was fun to figure out how to get the character from point A to point B believably.

How many did you make?
If you include special editions, well over 100, I’ve lost count honestly.
If you don’t include them, just around 76 I believe. I honestly have lost count because I’m always working on films and in “go” mode. But they tell a tapestry of this character’s life, where you can watch an individual film and take away something from it, or watch them all together and get a bigger picture.
I enjoy stories like that. But to those who fear-monger that CBS is going to come crashing down on anyone who bends the guidelines, I think I’ve proven that if your heart is in the right place, they honestly have no issue with fan films.

That is a lot of fan-films. Are you going to watch them all again someday?
I watch a film from time to time if the mood strikes. Not as often as you’d think tho, I think some are better than others.
All of the stories are important for this characters life but not every film is as enjoyable for just a sit down watch. I made my films to be as accessible as possible and to be able to be binge-watched. That’s never been done before in fan films, but no, I’ve always been there kind of person to move on to the next thing. Let others enjoy the films when they comment, then you can enjoy it thru their eyes, but I’ve kinda been there and done that with my own work….
I’m just not that exciting in my own eyes. lol

What did you think of the changed Guidelines when they were released?
There were a lot of people that were flipping out and I hated that. Knee jerk reactions are usually the wrong ones to have. And even now you have people that talk trash on CBS for the guidelines and I’ve found those people usually haven’t had a hand in making a fan film, so I see no merit in what they are saying.
I was a tad leery at first when they came out, but after Van Citers came out and talked about them, I didn’t see them as being this super huge life-altering thing. I still don’t. But then, I don’t take myself to seriously in fan films. I’m just a fat guy in a star trek uniform playing dress-up with his friends. And I’m just having fun. Thankfully they let me.
I think if they ever stumbled upon my films, they’d see that I’m no threat to them. No one’s going to mistake one of my films for Star Trek Discovery or Star Trek Picard. lol

Do you work with other (fan)filmmakers?
Absolutely. George Kayaian, Robin Hiert, Nick J Cook, Luke Sutton, Joshua Irwin and Victoria Fox, Gary Davis, Michael L King, Jose E Cepeda, Glen Wolfe and Dan Reynolds. There’s more but yea, I work with as many as I can and I’m always reaching out to ppl to do things with. I enjoy doing things with others and that crossover vibe is always fun, because why not?

We’re all part of the star trek universe and we should be realistically aware of each other. And these guys are all fun people to collaborate with. I’ve been very blessed to be able to do things with them whenever the opportunity arises. That’s the fun thing about fan films, most people will help you if you ask.

Which Star Trek series do you like most and why?
I grew up on star trek the next generation but my “go-to trek” has got to be deep space nine. That show has such a rich ensemble of characters that you didn’t see at the time and I think it was very much ahead of the game. Even the sub-characters were very well developed.
I modelled the Constar Chronicles very much after ds9, which for what happened in one episode, it really mattered later on. And it may not even be til episodes later, if not seasons later, but actions had consequences. And I liked that very much. Plus I think Captain Sisko is still one of my favourite captains. Picard and Pike being right up there.

In wich Star Trek era do your Fan-films take place?
In almost every era of the Trek universe, from cage era to tos, to the movie era, to the next-gen/ds9 and right up past to the all good things era and then the star trek Picard era. I have films in the mirror universe and the Kelvin universe.
I seriously explore almost every aspect of this character from almost every viewpoint. From an engineer to a captain. I have hints of enterprise era and discovery era in a few of my films. So I really go all out in the films. Part of that stems from me reaching out to cosplayers and friends who have uniforms and such and see if they’d be interested in doing something, then just writing accordingly. I’m a fan of seeing different uniforms so that’s a lot of fun and I’m very flexible on how I do things.

Are there any plans for another fan-film?
I think this will be the last year I do fan films. After doing so many, I think I’ve told all the stories I need to tell. I’ve had a lot of fun with my friends in them, and my son has joined me on sets and been in some. You learn to never say never but I think after this year of doing them, it’s time for me to step back and pass the torch to my friends who are interested in telling stories of their own. And watch as a fan again. So I have maybe 10 more short films, but I think after that I’m kinda done.
It’s been an honour to play a character that a small group of people have enjoyed, but I’m ready to just enjoy being a dad and pursue other things.

After those 10 last fan-films can we still enjoy your character in upcoming fan-films from others?
Again never say never. As passing the torch to Greg Teft, who plays Russo in my films, and letting him take over, I still want to visit every year when they shoot. Take my son, and have him still see the “starship.” That’s been a tradition that we’ve done ever since he was 4 months old. And he’s been on every shoot I’ve been on since he was born. So id love for him to continue to be in fan films, as he’s been in several and I’ll welcome things if the story is right, but I’m sort of on burnt out and I really don’t think anyone needs to see me.
Let all these other great characters we’ve built up get their chance to shine lol cause that’s what the Constar Chronicles was all about, much like Deep Space 9, all these different characters getting a chance to shine. So although I’m not opposed to coming back, I’m not even thinking of it at the moment, and I look forward to stepping away

If you could live in the Star Trek universe what would you be/do? Quark/Guinan, lol.
I feel having done so many fan films, star fleet isn’t for me anymore. That part of the dream that I had as a kid isn’t as appealing as it once was. So I think sitting there and serving the heroes, it’s kinda appealing Haha.

If you had one wish for mankind, what would that be?
Honestly, as cliche as it may sound, I would wish for people to have hope. As I look out there today, there’s not a lot of hope in today’s society or economic stresses and that really scares me. I’m a father first, and everything I do is for my son, this world doesn’t give me the hope for him that I wish it did. The belief for a better tomorrow, it’s just not there, and we desperately need that.
We need heroes now, more than ever. So, if I had a wish for the world, it would be for people to have their faith and hope restored. Because hope can be a very powerful thing.

Want to see Vance Major in action? Take a look at his personal youtube page: https://www.youtube.com/user/vanceamania