My name’s Rudolf Pressiatiuck, I’m 42 years old and I live in Belgium. I’m a drummer and quit school at age 17 to become a rockstar, unfortunately after over a decade of practicing, recording and performing I had to accept that that will never happen.

Did you ever try to play some Star Trek themed music?

I’we never played any Star Trek themed music.But one of my guitarists used to play the ST theme during soundchecks sometimes to amuse me.

Why do you consider yourself a Star Trek fan?
I consider myself a Star Trek fan simply because I love Star Trek, mainly (and that’s just a matter of taste, no divisiveness intended) the series up to and including Enterprise and several fan productions. Besides Star Trek I also love The Orville, politics, history, books and underground music.

Star Trek The Original Series is my favorite, for a big part because of nostalgia, it’s the first Star Trek show I ever saw (The Omega Glory episode). But also because I love the chemistry between Kirk, Spock and McCoy and I prefer episodic storytelling, you  can just pick any episode of any season and watch it separately.

I’ve never seen Lower Decks.  I checked out Discovery but never got passed episode 1, it’s too dark (like the next gen movies, you know), I don’t like the characters and the modern look of the uniforms and ship,…   But I am biased because I was already disappointed when I found out it was a prequel (sort of) instead of a continuation. But my wife absolutely loves Discovery. I started Picard and am at episode 3 now. Again, I was biased from the start, I would have loved it to be very low key series about Picard’s retirement days on the vineyard, post-TNG series and ignoring the movies completely. But that’s not what it is unfortunately. But I am gonna finish at least one season of Picard to give it a chance.

I gave my wife a Tribble, for no special reason, just because I knew s he’d love it. 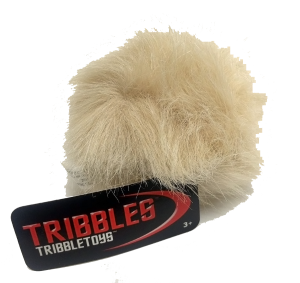 Ever received a Star Trek gift yourself?

The last Star Trek gift I ever received was something I never thought existed: drink coasters from Quark’s bar, a gift from my wife.

I never wanted to be a captain, but I ‘d  love to be a 1st officer. But now I’m getting older I would rather be sitting at Quark’s bar all day long every day and just observe everyone and everything.

If you had one wish for mankind what would it be?

Just one would be difficult so I’m gonna cheat and have 2 wishes.

1. No more religion, except solely in a traditional sense. Science instead of religion.
2. Less negativity/hatred and complete acceptance of each other’s differences, including political affiliation and unpopular opinions.