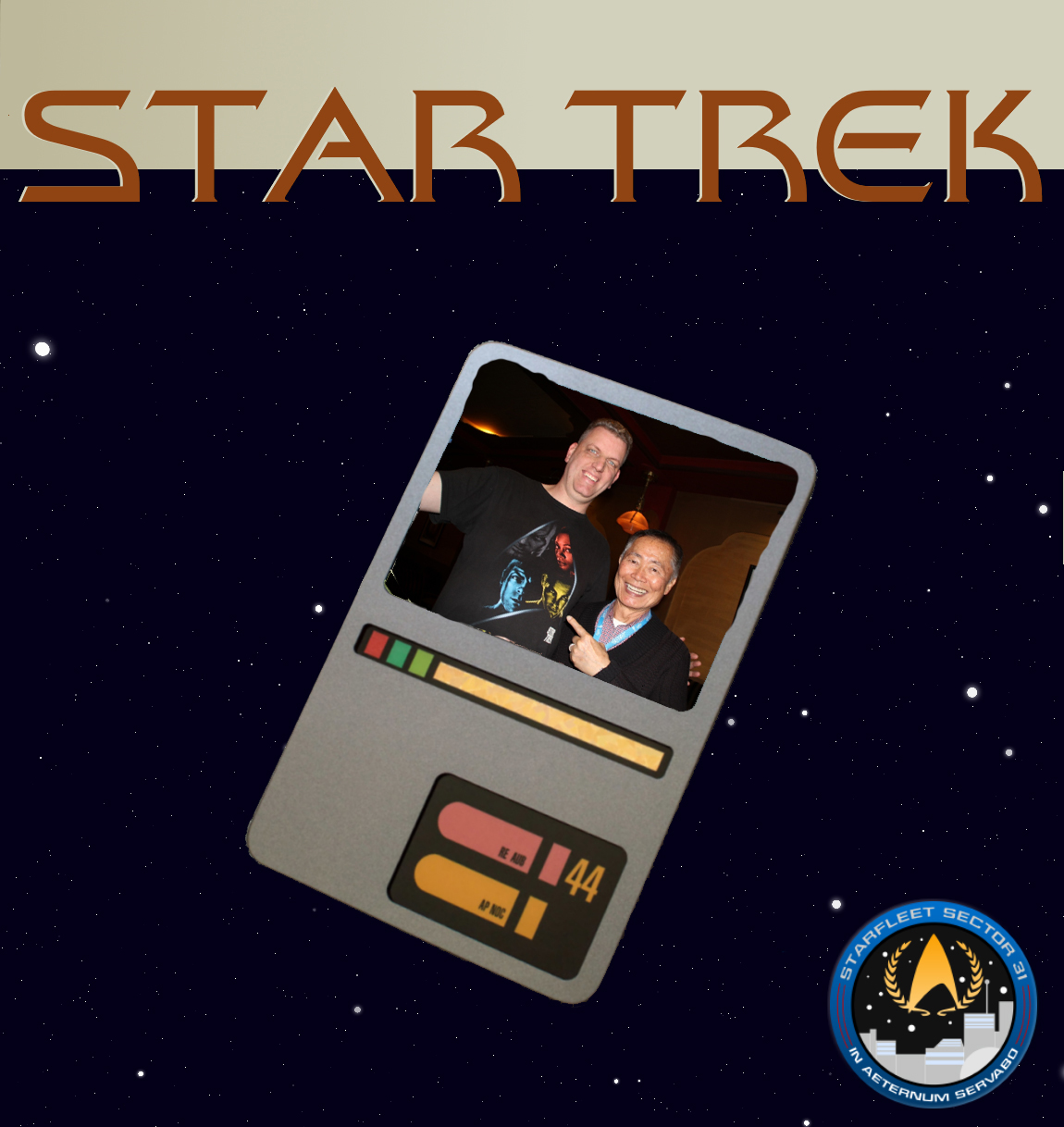 I am Pim Blokker, 45 years old, living and working in the Dutch city of Delft. I work as a senior lab technician in a Quality Control Laboratory where I am involved in the release testing of food, medicinal and enzymatic products. Star Trek is my greatest hobby, next to other science fiction movies and series, space exploration and -flight,  walking, hiking, and playing Star Trek / adventure PC games. I am president of Star Trek fan club The Flying Dutch, which organizes and visits Star Trek related activities through the country (and occasionally abroad). I have been for 7 years now, and combine it with the role of event coordinator, being my previous task within the fan club. It brings me a lot of fun and joy. With the new series Discovery, Picard and those to come, there is enough to talk about, until I start travelling trough the stars myself. But that might be a good century away!

Why do you consider yourself a Star trek fan?

Well…because I watched all Star Trek series and movies multiple times.   I own all of them on DVD/Blu-ray, visit  Star Trek events for many years now mostly in cosplay.

I have been organizing Star Trek events for The Flying Dutch for about 2 decades now.

And donated to the “For the Love of Spock” documentary,  the official fan poster hanging on my wall with my own cosplay picture being part of it. 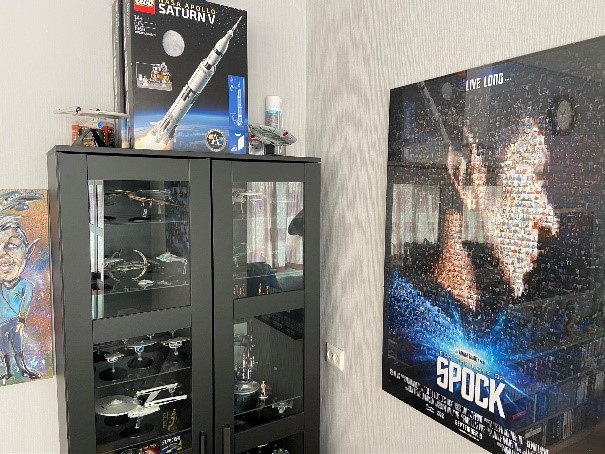 I also own a rather large collection of Star Trek merchandise, ships, books, chess set, etc… 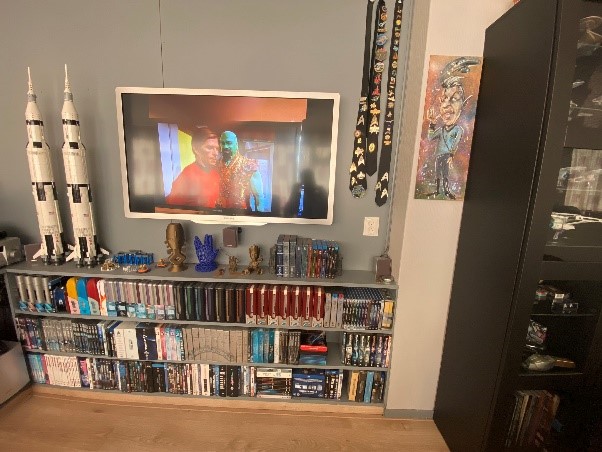 The Next Generation made me become a big Star Trek fan. I love the challenges to the prime directive Jean-Luc Picard had to deal with. In many situations he is challenged to these principles, he sworn to live by. I loved the way he applied them and found challenging solutions for difficult situations and pay respect to all parties involved. Patrick Stewart once said that the world needs more Piccard’s. I think he made a good point to what the world needs to better themselves.

What was the last Star Trek related gift you gave to someone and why?

The William Shatner Christmas album, because it is something completely different and has an ‘out of this world’ quality which makes you laugh .

Shatner made a Christmas album? Is it something we should listen to? Or should we skip this one?

Yes! Shatner made a Christmas album, in 2018: Shatner Claus. It is an album with great classics such as Silent Night, Jingle Bells and White Christmas. He sings with other artists, and to be honest, not all music to my ears. Shatner’s singing abilities  are …well.. not the best, some even say the genre ‘spoken word’ was created especially for him. The version of Rudolph, the red nose reindeer is very rocky and made me laugh out loud. No silent Christmases anymore! But after seeing the video clip I saw quality in it, and the fun he had making this. It is available on Spotify, You-tube, and bol.com . It’s a unique experience don’t say I didn’t warn you  !

I keep imagining what beautiful places there must be ‘out there in space’ and what great discoveries are waiting to be made.  As a fan of real space exploration I now how hard it is to go into space and that the human body is the biggest threshold is to accomplish space exploration. So in Star Trek I would be on board a (preferably nebula class) science vessel exploring the universe as a science officer.

Stop fighting, war and corruption. Use all those resources  for healthcare, beter food distribution and sustainable living instead. I think the world could become a better place for everyone. Mankind has great potential, and when nurtured the right way accomplish unbelievable things, and reach for the stars!

Which Star Trek PC game do you like best?

Star Trek Online. I have been playing it from the beginning, now 10 years ago, and love the storylines they added to the Star Trek universe. The war with the Borg, a new home for the Romulans, an ignorant Sela causing so much trouble, new species, and of course showing the true nature of the Founders. With many characters from the series brought back to life with the original actors voice the game truly continues the Star Trek timeline. It is a game you can play for free, or, as I do,  with a lifetime account with extra benefits. I love the large amount of ships (over 600) you can play with, they look really awesome and you can adapt them to your needs.  I don’t like the grinding aspect of the game, because it requires a player to repeat some missions many times. But that is inherent with MMORPG. (Massive Online Role Playing Games). The options to get the most out of the game are very extensive and require a lot of time.

New content is added and updated regularly, so the game stays on track with the latest series such as Discovery. For me it has been a lot of fun to play and see myself playing for many years.

What do you think about the new series, Discovery and Picard ?

I like both series. Discovery has made two completely different seasons, of which I like the second better than the first. To summarize season one as I see it: Klingon’s are portrayed as cowards without honor. Back-off, or I will push the button….and they did.  In my opinion a disappointing ending of the first season. The characters are certainly interesting which is shown in season 2 much better. The addition of Pike and Spock with the red angel, ‘control’ and disappearance to the future story-lines show a lot of promise for the coming seasons.  I’d love to see Spock coming with them to the future. But that would have set a predictable outcome (if you want to keep the continuity in the Star Trek timeline): Discover will return, because he will never have met Kirk.

“Picard is so captivating , can’t wait for the next episode“

The Picard series is kinda what I expected it to be. A story line that moves ahead slowly with some surprises. The story is so captivating that I want to see more when an episode ends. Can’t wait another week to see the next. With two more episodes to go I do hope Starfleet will be restored as we know it. They seem completely lost and in my opinion that happened too easy. Like the was no backbone in the organisation, opposite of what TNG – Picard  showed us. I like the civilian approach angle of the story, but am missing the old Starfleet approach. It seems to me that mankind has not evolved as far as the other series showed. Seven is awesome, I hope she stays! And not kill her self saving the rest…as I expect her to do so.