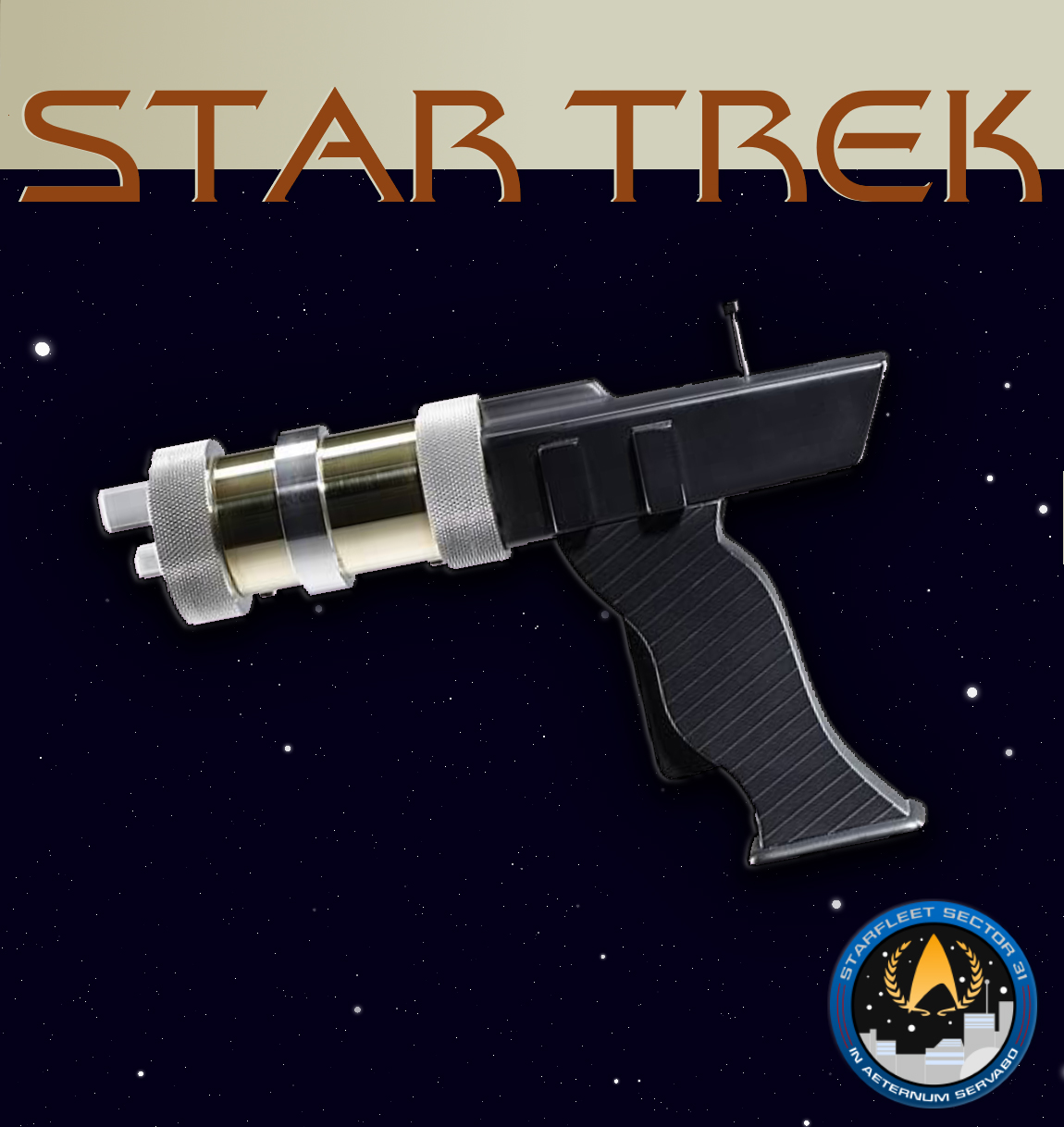 The laser Pistol, Limited issue personal weapon for Starfleet personnel during 2260’s. An advancement over the earlier Mk.1 pistol, this weapon featured an increase in power while retaining the size and weight of the previous model. As with the Mk.1 model, rotation of the forward triple barrel ring varied the intensity of the laser beam, the larger barrel providing the greatest intensity, but power was now regulated using the secondary barrel ring which would extend the length of the barrel tube to gain an increase in power.

The laser pistol was the first hand held weapon in Star Trek production history, however in-universe, following Star Trek: Enterprise‘s introduction of phase pistols, they might be seen as a step back in technology from the obviously named forerunner of hand phasers. However, laser pistols have also been shown used alongside phaser rifles suggesting they are perhaps an intermediate step used until phaser technology was available in a more compact form.

The original prop was designed and produced by Wah Chang’s Project Unlimited, Inc. in 1964 for the pilot production, “The Cage”. Close examination reveals the controls on the side are painted typewriter keys. The prop was slightly modified for its later appearances in “Where No Man Has Gone Before”, “The Man Trap”, and “What Are Little Girls Made Of?”. They contained a tiny flip-up sight on top and the barrel could be extended with a twisting/ratcheting motion for greater power. This prop was modified by the addition of a wheel-like attachment on the back of the body of the weapon and a textured grip.

The Cage’ Laser Pistol notably appeared in the Star Trek pilot episode bearing the same name. The TOS Laser Pistol Replica was made from scratch using all available picture and episodic references by master prop maker Michael Moore of HMS Creative Productions. This prop consists of a combination of black painted wood was used to create the handle, and  a copper barrel with aluminium rings. Plexiglas emitters were placed on the front.

Availability:
For the Star Trek collector that has to have it all and wants the very best, this Star Trek Cage Pistol Prop Replica could be the defining piece.  Many can be found on sites such as E-bay and Amazon. Depending on used materials and quality, prices range from as low as 25€ up to almost 500€ .

You can take a closer look at different props during one of the Sector 31 meetings.