Jeroen Bakker ,I am busy with all kinds of fun activities, I compose music and I write poems. I am currently working hard on translating The Chronicles of Oz. I also run my own publishing house. 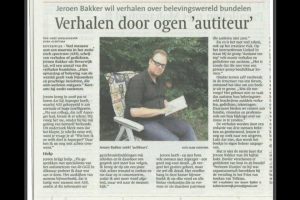 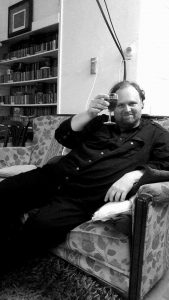 Plain and simple :Because I like Star Trek. I am also a huge Tolkien fan

The Original Series, because they are the beginning. 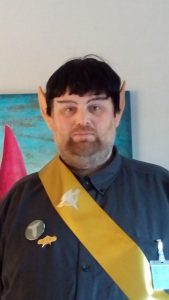 Actually, I once ran into George Takei at Amsterdam Central train station, camera’s on phones where not yet common place, but we both nodded and moved on.

I don’t think I ever gave someone a Star Trek gift, not much people in my inner circle are Star Trek fans, and if they are there really isn’t that much to give as they would have it already. However, one might consider my composition ‘Requiem for Spock’ (for Vulcan Lyrette and Earth Violoncello) a gift, as I dedicated it to Mr. Nimoy after his death. (B.t.w., anyone out there that plays a Vulcan Lyrette (digital or analogue), if so please contact me, we might get the piece recorded. 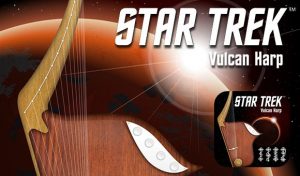 Here’s a link to the piece, as performed by a computer: https://youtu.be/AcV8nAXms_E

Ever received a Star Trek gift yourself?

Yes, when I graduated from secondary school my parents allowed me a silver signet ring with my initials engraved in Klingon (an alphabet transcription, not a translation).

I rather like my cosplay role as the Romulan ambassador to the United Federation of Planets. 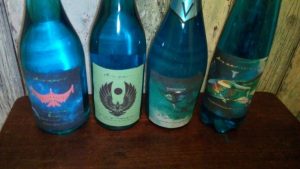 If you come to the annual Sector 31 meeting, what do you hope to find there? |

I have no clue,  I’ve never been to a Sector 31 meeting before, but it is on my ‘to do’ list, and I hope to meet people I can interact with, being diagnosed with autism makes it a bit hard, but makes it very easy to play a Vulcan, that is why I choose a Romulan for my cosplay, I needed a challenge ?

If you had one wish for mankind what would it be?

My wish for mankind is to grow extinct. Let me tell you why. If humans don’t better themselves it is very likely that with their expansion drift humans venture forth into the universe and keep expanding at any cost. Humans are killing their planet and harming themselves and if they leave it and did not learn from the mistake made on and to the Earth itself, they do not deserve to settle or colonize other worlds if they are to repeat their mistakes.

To quote the Great Bird himself, “ … For if we cannot learn to value the small variations among our own kind here on earth, then God help us when we get out into space and meet the variations thar are almost certainly out there.”

He was speaking to the human interaction with other humans and possibly aliens, but to me it also applies to the way humans tread their planet and will tread other planets. If human would venture beyond this world it is not for exploration but for the survival of the species and for commerce. Because to live on other worlds means to use that world resources and to ‘mine’ those resources one needs businesses and though one might use robotic or A.I. for labour eventually humans are needed for maintenance and programming, and for building societies. Robots and A.I. can replace humans in about every shape and size except for one, in flesh and blood. If the Earth is dying because of humans, we need a place to ‘run’ to if their species is to survive.

Trust me, I do know this is a grim prospect on my behalf, but I do hope for the best but also fear for the worst. So my wish for mankind? Better itself …….or grow extinct, it might be much better for the universe.